The BM10k and the Brighton Marathon
So there it is the 9th BM is now done and dusted but what a cracking weekend it was. The weather played ball this year with great running conditions and a little bit of drizzly rain later on to help those that had been on the course a little bit longer.
From the volunteers view down at the finishing straight we saw it all. The amazing achievement of the blind lady doing her first ever 10k with only her guide dog for company, I was told that this was the first time this had been done. There was the man who juggled his way around the course plus 5 panda’s, 1 Stormtrooper, 2 Fred Flintstones, a toilet, a phone box and numerous tutu’s plus 2 marriage proposals (and they both said yes).
This is not what we want to read about though; we want to hear about our guys on the front line of it all, our club members who have trained through a pretty harsh winter it has to be said. Those long cold, windy, snowy days when a lot of us stayed in the warmth but we are not the hero’s here, it’s those that took to the line that are the hero’s.
First we’ll take a look at the BM10k race results and can see that Arena had 12 athletes taking to the start line of this race. This is actually quite a low turn-out for our members in comparison to previous years and other 10k races. Our first Arena lady home was Emily Proto who went in to this race with no expectations of running any particularly fast time and was very relaxed about this race. Well I’m not sure what she had for breakfast that day but BOOM she only went and bagged her fastest 10k time in 3 years and in doing so also bagged herself a new PB time of 36.25. This now consolidates her 5th place in the women’s 10k club records and improves her time by another 7 seconds. We congratulate Emily on another superb performance.
The second Arena lady home was Tara Shanahan who is holding such brilliant consistent form at the moment as she came home in 38.16 to which is her second fastest 10k time ever so a very pleasing result for Tara. The third Arena lady home was a recent edition to the club in the form of the youngster Lucy May-Richardson with a time of 40.26. I haven’t seen her stats to see how this fairs against her other results but she is definitely one to watch over the coming years.
For the men then it was Jim Risdale who took the honours of first Arena man home in a time of 36.29 and as is always the case, you know you will never get less than 110% from Jim in a race so well done Jim. Second Arena man home and only just behind Jim was David Gifford who bagged himself a new PB time of 36.44 so a really pleasing day for David. The third Arena man came from captain fantastic Dan Vaughan with his time 37.20.
So on to the Brighton Marathon then where Arena showed 25 of our athletes off, again this is well down on previous years so no pressure on those representing then J.

The first three Arena men came from Andy Payne 3.09.17, Andrew Wood 3.14.32 and Kevin Martin 3.18.08. Andy Payne last ran the marathon back in 2012 so this was going to be a big ask from him considering his injury hit year last year. From what hear Andy had a great two thirds of the race but hit the wall near the lagoon and had to really dig in hard for the last few miles to get over the line. However the hero of the whole day for me goes to Teo Van Well. Teo was at the lagoon and could see Andy was in trouble so Teo decided to help Andy along for a bit to get him back in to the groove. Teo with no real running kit on and his back pack on paced Andy along the seafront in the hope to kick start Andy of again but Teo ended up pacing all the way over to the finish line to make sure Andy finished. There is a lot said about the true camaraderie and the spirit of this club and I think this cannot be summed up any better than this moment of true friendship and this level of support is truly remarkable and support it really doesn’t get any bigger than this. Thank you Teo!!
Andrew Wood took this marathon on and the boy did good with a time of 3.14.32 which is the first marathon he says he ran really well in and as such he got himself a big shiny PB time by taking 6 minutes off his previous best. I saw Andrew just after he had crossed the line and you wouldn’t have thought he had just run a marathon as he looked very fresh and full of energy and really deserving of his time. Andrew did say that he couldn’t have done this without the help of Arena. 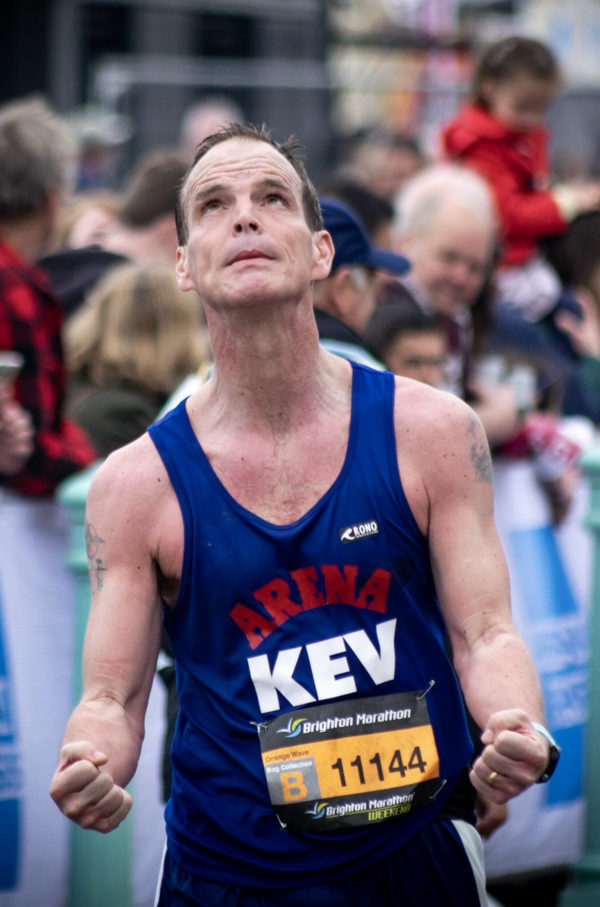 Third Arena man was Kevin Martin with his 3.18.08 which I know Kevin is disappointed with but if you had seen what he had to go through in the last 180m then you would have had a tear in your eye. With 180m to go something pinged in his leg and all Kev could do was to almost hop the last part of the finishing straight and you could see it in his face that he was in pain. It was a really valiant effort considering his circumstances and hats off to even finishing the race when he could quite easily have got medical treatment instead.
Moving on to the women our Arena 1,2,3 went with Soulla Wright, Katherine O’Hara and Emma Habba.

I am so pleased for Soulla who took the line in 3.10.25 and smashed her previous PB time of 3.14.18 set in 2016. I know last year she really hit the wall and had a torrid last quarter to the race but she was determined this year to go sub 3.15 and boy did she do it. She said that she was hurting in the last 3 miles but you wouldn’t have known it coming across the line. Superb run and really glad she can put last year behind her and now glow with this new PB time.
Second lady home was Katherine with a time of 3.13.08. Katherine was another of the runners to really feel it in the last few miles. She was in a lot of pain in her feet and calves and it took every ounce of courage and determination that she had to even finish this race but if anyone has got that then there is no one better than Katherine than can do this. Even in pain her photos still paint her as ice cool so well done on a courageous run. 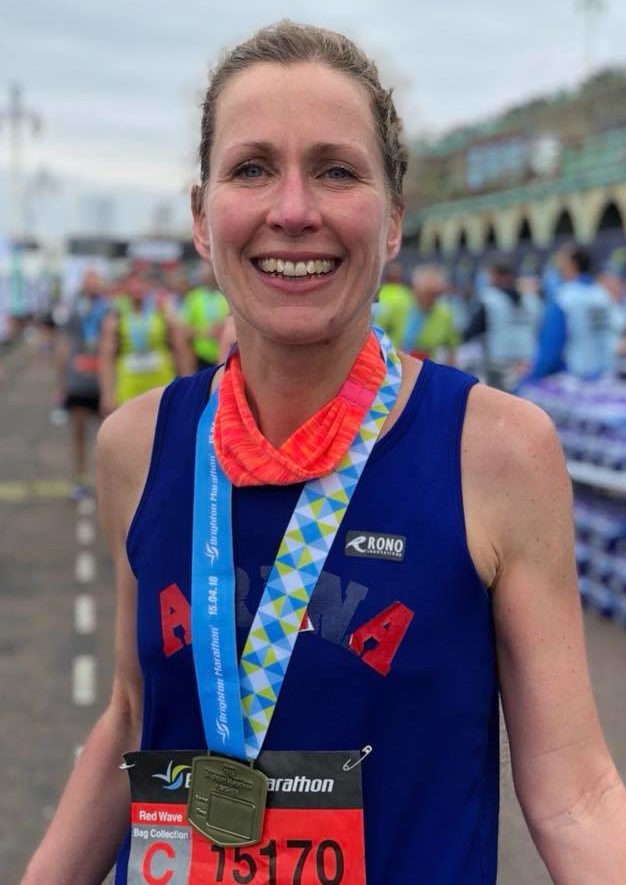 I couldn’t be anymore happier for our third place Arena women Emma Habba who came home in 3.35.03. I remember when Emma first joined Arena and she was jogging around the track in a fairly easy comfortable paced group. Roll on a few years and here she is doing marathons in the 3.30’s. I caught up with Emma when she crossed the line and you could see she had given the race a real good crack but I was glad to see that she was really pleased with her result and felt she had given a good account of herself.
We would like to say a massive well done to all of our guys who completed the marathon and I know there are those out there who overcame some challenges and achieved their own personal goals so we salute each and every one of you.
Reading through some of the posts one thing seems to crop up time and time again and that was the support from our Arena members around the course. It seems the lift it gave our athletes was worth another few minutes gained in time as they were buoyed on by the support. Running 26.1 miles can be quite lonely at times despite the thousands running so to hear a shout from one of your club members really does seem to give that extra boost of confidence. So many times I’ve read that Arena really is the best club to be associated with and it’s on days like this that the true spirit of the club comes to the fore, there surely is no other club quite like Arena when it comes to giving support to other club members. We are 227 individual members but we all act as one.
As the club mantra says: Be respectful, be supportive, be the best you can and I think we can safely say that this showed in abundance this weekend.
I can’t sign of until one more mention to Nicky Yeates who ran in the Boston marathon in probably if not the worst weather conditions I have ever seen for any race let alone a marathon. If you haven’t see what the weather was like then google it and you will see why Nicky’s time is even more remarkable as she finished in a time of 3.45.21. This truly is a ridiculous time given the conditions and so to you Nicky it really is incredible and again our hats off to you on a brilliant achievement all things considered.
Well done to all of our Brighton Heroes!!