The hottest London Marathon on record at 24.1 but given the heat of being in a mass of people plus the heat from the road and buildings then it would have been even warmer.
Arena had eight of our athletes up there for this one so we must say a huge congratulations to each and every one of them. One of them was doing her second marathon in a week so big up to Soulla Wright.
At our Arena Christmas track soiree, we had the draw for two places for this years London Marathon which went to one of the nicest couples you could wish to meet, that being Ricky Coleman and Joanne Marshall.
It’s here where we start as we hear it from their side of the race. Ricky Coleman said “in the end it was a tale of two races, Jo was fantastic and held a good pace throughout finishing about 10 minutes over her target time of sub 4. After having to walk the last part of Brighton marathon last year, she was determined not to this time and stuck to her word. I have no idea how she did it in that heat!
You would run through a shower on course and then come back out the other side into what seemed like a furnace. The heat seemed to be everywhere and you would cross the road just to get 10 seconds of respite.
Unfortunately the heat was a bit too much for me and I crashed badly after 22 miles and had to run walk the last few miles. I ended up in the medics tent with heat exhaustion. So it didn’t go to plan but it was still a great day.
It was a hell of an experience and we both said the crowds were just incredible, really driving us along – they cheered, handed out ice poles and sprayed us with water. We’re very thankful to the club for making it possible for us to run one of the worlds best marathons!”.
Soulla Wright who did the Brighton marathon the week before in a time of 3.10.25 wanted to enjoy London so here’s what she had to say about it; “Sunday was much more enjoyable for me than last week. Having got my target time in Brighton I felt very relaxed and excited.. a bit too excited as I shot off like a rocket! At 4 miles the intense heat and heavy legs reminded me that I had a long way to go, so I slowed to a more sensible pace and took in the incredible atmosphere. Fatigue and heat started to take its toll about mile 18 but the epic crowds and plenty of water thrown over my head got me through and although I swore I would never do two marathons in a week again.. I probably will”.
When you read their versions it really does hit home about the heat they were running in and let’s face it, they haven’t exactly trained in that heat. 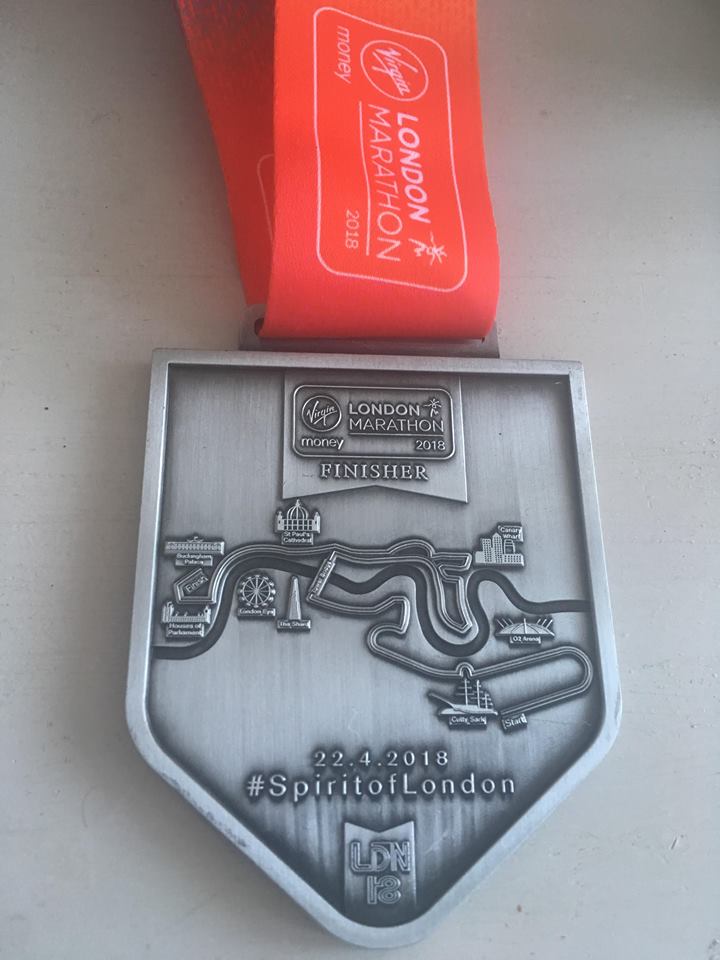 There were some good results in there:
3113th Soulla Wright 3.21.19 – 45th in her age category
3917th Marcus Escott 3.27.21
7222nd Stephen Johnson 3.48.06
7434th Marc Steene 3.49.19 – 241st in his age category
7981st Ricky Coleman 3.52.05
11,905th Jo Marshall 4.11.51
12,454th Richard West 4.14.31
33,894th Mark Brocklehurst 5.56.54
I would also like to mention Darren Avery who like Soulla took on Brighton and then Southampton a week later. His time for Brighton was 3.40.05 and Southampton was 3.47.15 and again, it was a lot warmer than the previous week.
Well done to all of our guys that took on Brighton, London, Southampton and came away with a story to tell and an experience to last a lifetime, you’ve done yourselves proud.
Did you know that only 2% of the population will run a marathon so congratulations on being in the 2% club.
Before we leave this post, I wanted to share a post that one of our members (Del Wallace) put up and i thought it was a really good read and holds so much truth in what is written, it certainly brings it home at the achievement the marathon is:
Click here for the article: What was your marathon time? Who cares.