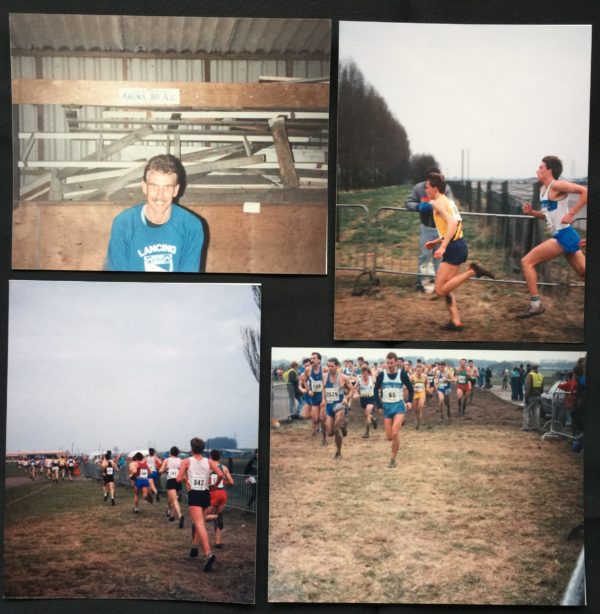 Our old website had a rich set of posts about the club history. Don’t worry – we’ve saved all of the posts and you can find them all below. Many thanks to Mark Bonaldi for his time researching the club’s background .

If you have any stories about Arena’s history that you would like to share, please get in touch.

We’ve managed to find these photo’s from the archives of how it was back in the 80’s. The athletes would get changed in cattle sheds (so glamourous) as shown in the photo with an ex member Peter Fair. Above all this was when men were men and wore shorts that even Kylie would be proud of.

Found in the archives are these results from what was the Arena club championships that Arena used to hold. These are from 1998 and 2001 and show that the athletes back then had to do a mixture of different races and depending on their times and places they then scored points to eventually have an overall winner at the end of them. I don’t have the details as to how it was done but it will be interesting to find out.

Here is a newspaper article from around 1985 showing how Ron Grover not only wanted the team to be the best but also look the best. It’s all about the fashion darlings and check out how much kitting yourself would have cost you back then.

Here is a fascinating newspaper article from around 2000 we think. It gives a great overview of Ron Grover and why he started the club.

It has a piece on Lynn Williams & Caroline Herbert (Hoyte) and their athletic achievements.

in October 1999 Bill retired from running and his coaching (and secretarial) duties due to injury and so again Arena was looking for a new coach/chairman. As it happened there was a new kid on the block who had been with Arena for a short while who seemed to be able to run a little and to hold a conversation with the other members of the club. It was at this point that the, then, club secretary said to a young Bob Page that he should put himself forward as he could be quite good. Bob Page had no idea about coaching or how to run a running club. Well I think it’s fair to say that it was a pretty good decision by the secretary and also for Bob to accept the challenge. Bob has nurtured the club over many years and the knowledge that he holds is truly second to none. When not coaching or being chairman Bob can very often be found at a race somewhere adjudicating as well as updating his own website, www.sussexraces.co.uk

In 2016 John Mason stepped down as President of the club and there was really only one choice for this role, Chris Naylor. Chris has given so much of her time to the club over many years and been a fine ambassador for the club, especially the women’s side. Her commitment to running has been exemplary and has been an inspiration to many in the past as well as the present.

The club has been very fortunate over the years to have had so many good coaches, chairmen and presidents to help keep the spirit of Arena alive and kicking.

It’s now 2017 and Arena 80 is as strong now as it’s ever been. With Bob Page as our coach and chairman and Chris Naylor as our Club President, Arena 80 find themselves in a very good place right now.

The club has grown immensely over the last few years as the running scene has become more popular. We are now at a stage where we have a waiting list to join our club. More and more people are hearing about the friendly club that is Arena 80, from our members, which has helped to shape the club to what it is today.

Arena stands out in its own right as being a very friendly and sociable club. It still maintains a solid core of good athletes in both the men’s and women’s sections and we have good strength within both of our teams. Indeed, only last year (2016) the Arena men won the 100 mile relay, and the women took the trophy this year (2017) for the first time in 10 years. Arena also took the team title for the Sussex Grand Prix races last year and after two races this year hold 1st place again. Arena has great strength in depth when it comes to races and it’s this which is setting us apart from many of the other clubs now.

We would like to say a big thank you to all of our past and current members, athletes, coaches, committee members, treasurers, secretaries and presidents that have helped to put us where we are today. Thank you also to all of our current committee members that give up so much of their time and effort to make Arena the well oiled club that it is and for their tireless work in making this such an incredible club to be a part of. I’m sure Arena will now build on their successes and continue to go from strength to strength over the coming years. The club started out with 12 Members, we now have over 200 members.

The club is steeped in history and has had so much success over many years. It is a club with a great tradition and we should all feel a sense of pride whenever we put on our blue vest for Arena. If you ask any member what the best thing about the club is then invariably it always comes back to ‘the people’ at the club. We have had and have so many characters that walk through our doors and each one of them adds something to our club. It’s a love for running that has bought us together and this is where good friendships are made.

It seems only fitting to end this history of the club special where it all began. Ron Grover started this club with a passion and a desire to be successful. He had a vision not just to create a club but create a great club, a club where like minded people would come together with a common goal, to bond, to socialise, to meet others that would go on to become friends, to pursue excellence, to strive to become better, to be determined, to never give up but most of all to be the best that you can. I can safely say that he succeeded and created a great club. His dream and his spirit still lives on within Arena 80 and long may it continue. I’m sure he would be very proud to see where his club is now, so here’s to Arena 2080.

The club motto still holds true after all these years and epitomises what the club stands for:

Be respectful, be supportive, be the best you can.

I would like to thank the following people for their help with getting the stories and the background to the club history: Chris & Mike Naylor, Roger Ockenden, Peter Fair, Bob Page. Without their input this would not have been possible.

Please note that the club’s history has been taken from various sources and is correct to the best of my knowledge. If you feel that something is incorrect then please contact Arena 80 via the contact email address so that it may be amended.

Such a fine club with so much history. Thank you to all our members, past and present, for being a part of our club’s history and future and for making this such a wonderful club to be with. Together we are Arena 80 , together we are The Areneez.