It’s not every day you get the chance to talk to a world record holder but that’s exactly what admin did today. I spoke to Dave Robinson, one of our Arena athletes to talk about his latest challenge which he completed. The challenge was the Brighton Marathon, all 26.2 miles of it and to complete it in under 3.50.00. Yeah yeah what’s so hard about that I hear you ask? I mean the time isn’t bad but many in Arena have beaten that time this year. Ah, well you see, there is a twist to this one. Phil Collins once had an album out called ‘no jacket required’, well sorry Phil you are wrong because this one that Dave did, required a jacket but not a tweed jacket or a suit jacket and not even a sports jacket, no this one was a bit special and the fact that he even wore this one for the marathon, in the words of Al Silvester “he ought to be in one”, that’s right Dave wore a straitjacket to run the marathon in.
Now what makes a sane man (and I use the term loosely) want to run a marathon in a garment like this? Dave told me of his aunt who has Alzheimer’s and he remembers her saying that “it’s like your mind being in a straitjacket” and this has always stuck with Dave. Anyway Dave was down the pub with a group of friends discussing the world (and isn’t this where all the best ideas are formed) and the idea was brandished about trying to break a world record. The idea soon snowballed and having checked the Guinness Book of Records, there was indeed a marathon record for running in a straitjacket. The scene has now been set for this extraordinary feat and so Dave decided to run for the Alzheimer’s charity.
In terms of training for something like this, Dave is a pretty fit guy anyway and has won medals at national and international levels for his age group. The training though was a little more different to the usual pounding out the miles. Having had a new born arrive at Christmas time it did throw the training out of kilt however Dave did a few track runs with Kevin Price and some longer runs peaking at a couple of 20 milers. He wore pretty much as much of his kit as he could to try to get used to the heat. He also tried to add as much weight as he could to load it to about 3-4 kilos. He did a lot of Ab work incorporating Russian twists with a ball which would normally consist of a set of 100 done three times. 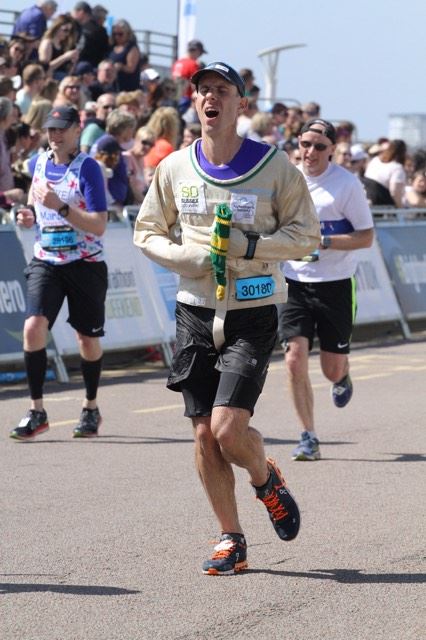 The world record for this insane run is 3.49.48 and we all know that the weather wasn’t really favourable for fancy dress on the day. To get this ratified by Guinness, Dave had to make sure that he got a photograph of himself at every mile marker. The jacket itself weighed in at 2 kilos and with the sweat and the water that was poured over his head during the race, the jacket, which was a heavy canvas, weighed in at 3 kilos.
A lot of runners talked of the head wind when you turned at Shoreham power station but Dave didn’t notice this, the only thing he could tell was the heat and the lack of being able to swing his arms when running. It was more of a side to side motion which is where the Russian twists training came into play. Now normally when we run we can check our watches to see how we are doing for time and pace but, here of course, you can see Dave’s dilemma. Dave had set his watch to beep at pace time and in order to be in with a shout of the record, he set the watch for an 8.45 pace so he at least had an idea of how he was doing. His first half went well clocking in at 1.49.00 so he had a little bit of room to play with for the second half of the race but for those that have done the marathon then it can get pretty brutal in the later stages let alone with a few extra obstacles being put in your way. Dave’s resting heart rate is about 45bpm but during this race he peaked at 183 with his average for the whole race being 170 so you can see it was fairly hard going even for someone like Dave who is pretty fit. There was however one low light during his quest, which was going for a pee half way through the race and not being able to use his hands, no details required at this point though.
So the world record was 3.49.48 and Dave was heading down the final stretch of the marathon and he could see the big gantry ahead of him and the clock was counting. Dave could hardly put in a full on powered sprint to the line and in his words “I did it on a wing and a prayer”. Dave crossed the line but still did not know at this point whether he had done enough. Pretty well exhausted Dave turned to look at the clock and the clock was showing 3.49.56 and so it was an agonising wait to see if he had made it or not. His time eventually filtered through and his time was confirmed at 3.49.28, he had done it and beaten the world record by 20 seconds, can you imagine just one more hand shake along the…oh wait…well anyway bravo Dave.
What an outstanding achievement from this Arena athlete and such an amazing athletic feat to have accomplished. The world record is still being ratified by Guinness as we speak so we won’t know the outcome for a few weeks but once we have the confirmation we will let you know. Dave was aiming to raise about £1000 for his chosen charity and he has currently hit £800. If you would like to make any donation, no matter how small it maybe then pop onto his just giving page: https://www.justgiving.com/fundraising/Straitjacket
Congratulations Dave Robinson we salute you on a job very well done albeit one crazy one.