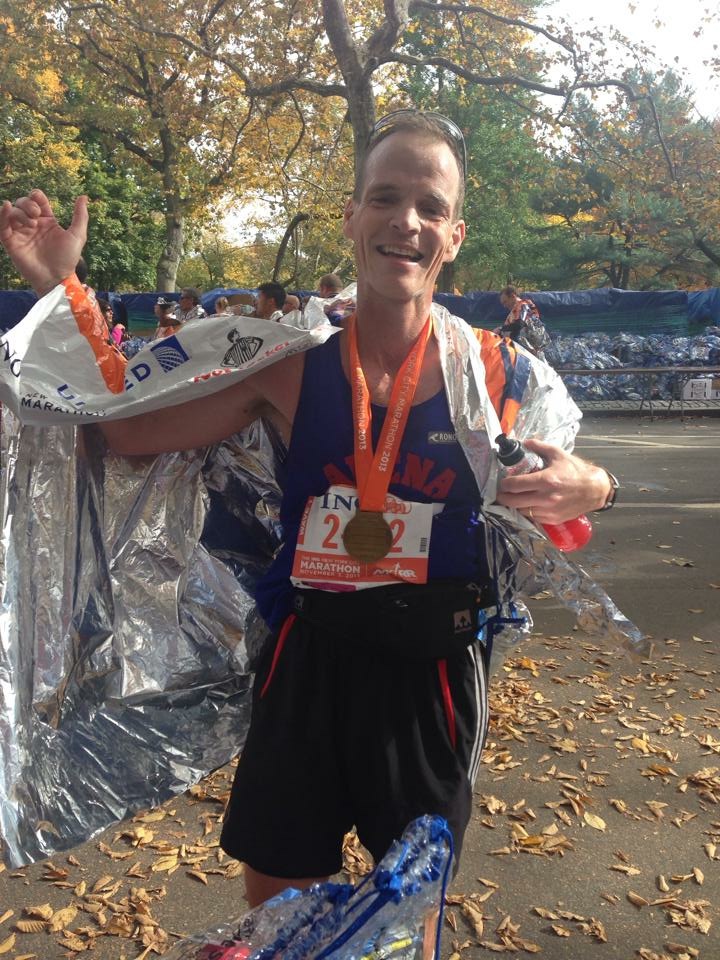 For this weeks chosen club member we are joined by the man who chased his dream and finally succeeded and by that I mean the illusive sub 3 hour marathon. Kevin Martin chased this dream for 5 years before finally triumphing at the Brighton marathon in 2015  with his 2.58.21. It is his ‘never say die’ attitude that always pushes him on and this is reflective in and outside of this running. Kevin has travelled the world to take part in some of the worlds best Marathons which consisted of New York in 2013, Tokyo and Amsterdam in 2014 and Chicago in 2015, definitely a case of ‘have shoes will travel’. Kevin has been out with injury recently but is hoping to get back to training in the very near future so expect to see him pushing hard around the track soon. Lets meet the man himself Mr Kevin Martin.
Name: Kevin Martin
1. When and why did you join Arena:
2007, after my first marathon, Arena were recommended to me by Kurt Hoyte as friendly and welcoming club, and he wasn’t wrong.
2. How long have you been running:
Since 2006, needed something to fire my competitive juices after giving up football, and someone dared me to enter the London Marathon in 2007, so I thought I better start training.
3. Where did you grow up:
Born in Crowborough, but have spent all but four years of my life in Brighton and Hove.
4. If you could visit any country in the world, where would you go:
Have always wanted to go to Rio de Janeiro in Brazil, the carnivals, the sights all look incredible. I will maybe look at the marathon at some point.
5. Apart from running what else do you do with your time:
Devoted husband and father of three and long suffering Arsenal season ticket holder (or should that be the other way round), and junior football coach and Manager.
6. What would you say to your younger self:
Hard work beats talent, when talent doesn’t work hard, is a phrase that has increasingly resonated with me as I have grown older.
7. If you could only have one meal for the rest of your life, what would it be:
Chicken and Chorizo Risotto is absolutely scrummy.
8. What are you most proud of in your life:
My wife Lisa with her unflinching support and loyalty and my children are developing and growing into fine young people.
9. Who is your sporting hero:
It has to be “Mr Arsenal” Tony Adams, I loved the way he played, maximised his talents and had the strength of mind and character to make a better life for himself, when he hit rock bottom.
10. What is your favourite album ever:
Difficult choice but London Calling by The Clash just gets better and better and brings back so many happy memories.
11. Do you have any phobias:
I am not great with heights, but wouldn’t call it a phobia, but am increasingly getting wary and worried about angry seagulls who seem to be targeting me more frequently when I am out running.
12. What makes you happy:
Simple stuff really, a nice meal and a glass of red with the family, Arsenal progressing beyond 4th place and the last 16 in the Champions league.
13. What do you consider to be the biggest world event of your lifetime:
I guess the breakup of the Soviet Union and communist Europe, in particular the Berlin Wall, having grown up throughout the Cold War, I could never have predicted that, just shows the power of politicians listening to their people and doing the right thing.
14. Who is your inspiration:
At the moment it is my running partner Mark O’Gara who is invincible at the moment and going from strength to strength with his running, am struggling to get anywhere near him, but am determined to get closer this year.
15. What’s something we don’t know about you:
Have attended 9 FA cup finals (8 for Arsenal and 1 for Brighton).
16. What’s the one thing you can’t live without:
Would have to say my mobile phone would be the answer in terms of possessions.
17. What is the hardest thing you ever had to do:
Accepting that my son was and is better at football than me at age 10 than I was as an adult, took me a long time to come to terms with that. He also says to me that he is going to beat my marathon PB at the first attempt, not sure where he gets his competitive streak from.
18. What us the best TV theme song ever:
The Sweeney – Had it as my ringtone for years.
19. What were you like at school:
Jack of all trades, master of none, always did enough to get by and keep myself under the radar, but never uprooted any trees.
20. What’s the last book you read:
Ray Parlour’s autobiography “The Real Romford Pele”.
Our biggest thanks to Kevin for his Q&A’s this week and we hope that you feel that you have now got to know Kevin a little better. Check back next Wednesday for another set of Q&A’s with our chosen club member.