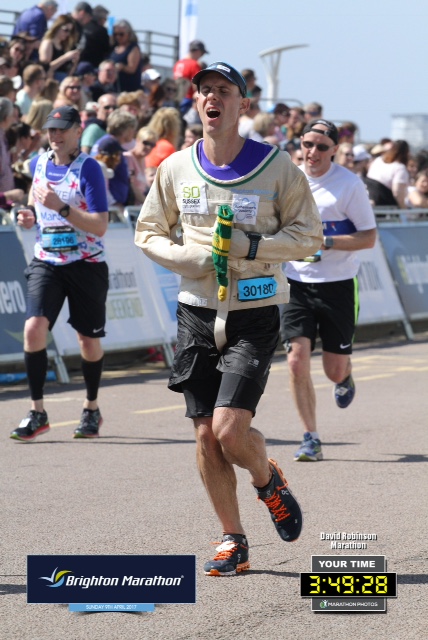 For this week’s chosen member we are joined by surely one of the most insane runners of our club, one Mr Dave Robinson. Many of you will know Dave from his world record set at the Brighton Marathon in April by running in a straitjacket in the quickest time ever. Insane idea to think of but more insane to actually put this into practise. Dave is an all-round athlete and is soon to represent England at the British triathlon age group and he’s also qualified for the sprint duathlon and aquathlon worlds which are in Canada in august. He is also hoping that he may qualify for the triathlon worlds in a few weeks in the 45+ age group! It will be his first time for the duathlon but he’s done the aquathlon and the tri for the last few years. For those that have not yet had the chance to meet Dave then I would say it’s a conversation worth having as he is an all-round nice guy. What sort of man wants to run in a straitjacket? Let’s find out more about Dave Robinson.
Name: Dave Robinson
1. When and why did you join Arena:
Just over a year ago, basically because I wanted to do some track sessions and Monday eve fits my timetable.
2. How long have you been running:
Shortly after I was able to walk! But mainly until 10 years ago it was for team sports.
3. Where did you grow up:
All over the UK but mainly Buckinghamshire.
4. Which three words describe you best:
Honest, loyal, laid back.
5. Apart from running what else do you do with your free time:
Swim, bike and gym.
6. Have you ever won any medals or competitions:
Yes quite a few the most notable being a silver for my age group in the European Aquathlon.
7. Tell us about something you would happily do again:
There’s very little I wouldn’t do again, I try never to regret anything.
8. What were you like at school:
Lazy, unless it was sport or if I had a very engaging teacher.
9. Who is your sporting hero:
Steve Redgrave, Daley Thompson
10. What kind of books do you like to read:
Autobiographies of successful people
11. Have you anything on your bucket list that you still want to do:
I keep adding to it every day.
12. What is your favourite drink:
Real ale.
13. What is your favourite album of all time:
Meat loaf, bat out of hell
14. Name 3 people (dead or alive) you would like to sit in a pub with:
Robin Hood, Odysseus, anyone buying the round!
15. Tell us something we don’t know about you:
I’m quite shy when I first meet new people.
16. What was the best thing growing up as a kid:
Being loved by my parents and able to run around without a care in the world.
17. What is your most used app and website:
BBC sport.
18. Are you scared of anything:
Spiders and heights.
19. If you didn’t run what other sport would you like to have done:
Triathlon but I do that now. There’s hardly a sport I haven’t tried.
20. What was the last book you read:
The hungry caterpillar! Currently reading the haywire heart and born to run.
Our biggest thanks to Dave for his Q&A’s this week and we hope that you feel that you have now got to know Dave a little better. Check back next Wednesday for another set of Q&A’s with our chosen club member.