So here it is! After much research and talking to past club members, we have put together the history of the club. There are 5 parts to this so we will put one part up each day for the next 5 days. I hope it gives you a sense of pride in the club, from where we came from to where we are today. We’ll also have a special ‘Get to know…’ over the next 5 says with some of our longer serving Arena members.
Arena Club History – Part 1
In the beginning…
The club was formed by a man named Ron Grover and started in 1981 and not 1980, as seems to be the perception. The club name came from the training sessions that took place at, what was then known as, the Withdean Arena Stadium however the idea of Arena AC was first thought about in 1980 hence the name Arena 80, pure genius.
Ron had a furniture shop in Boundary Road selling much of what he made however he also sold running kit and shoes in the shop under the name of “South Coast Runner”. Ron was a generous man and very often gave away Brooks trainers to Arena 80 members as well as offering them good discounts on running clothes as well. Ron himself was a very good sprinter back in the 1960’s.
To promote the running side of the business, Ron organised a race from his shop in Boundary Road to the Hove Town Hall which was probably his first foray into running races and later on, in his coaching career, he went on to help set up the Sussex Grand Prix races as well as the WSFRL races. Ron was also instrumental in helping to set up the Brighton Half Marathon under the then banner of the Sussex Beacon.
The club came to be as there was no club that catered for the average ‘Joe Jogger’ on the street who wanted to run, as the only other club locally was Brighton & Hove AC. It was Ron’s frustration with B&H, who were very ‘Track and Field’ elitist, and were never interested in ‘Joe Jogger’. Little did they know that Joe Jogger could become a Caroline Hoyte under the banner of Arena and produced nationally impressive times!
Arena’s first training night consisted of 11 women and it took a while for the numbers to grow as running, back in the day, was not as popular as it is today. Runners back then were classed as either slightly odd or a bit geeky (#washmymouthout). The numbers gradually grew as the ladies boyfriends starting to come along for the training sessions as well.
The training sessions back in the 80’s would have consisted of a couple of loops of the track and then out on the road, up to the Devils Dyke then back around Withdean and back into the stadium. The Wednesday night training sessions would be a 10 mile run from the King Alfred to the Marina and back. The return leg got a bit competitive (sound familiar) and Ron would be standing at the King Alfred with his stop watch. The guys would be completing the 10 miles in 51-52 minutes and instead of feeling elated they felt deflated as Ron would say “that’s not very good boys”, Ron was cruel but fair.
Did you know that in the early days, Arena once had a junior section. This however made a move over to Phoenix which was very successfully integrated. We can still see today that with some fine coaching bringing the junior section on, that this has been hugely successful.
Did you know that once Arena 80 had a race walking team and entered about 12 races a year for the club. Chris Rawlins, Maggies Rawlins and David Funnell all represented Arena 80 for walking.
Did you know that Arena 80 has an ex-international walker at the club. She goes by the name of Julie Drake ( you may have seen her at some races running with her dog on a lead). Julie represented Great Britain at the World Championships in Tokyo in 1991 and at the European Championships in Split in 1990. She did both of these in the 10km walk. Her time for the 10k in Tokyo was 49.47 (wow faster than many runners) and her time in the Europeans was 49.26. Julie also did the World and European Junior Championships in the 5km walk, and World Indoor Championships in the 3000m walk. 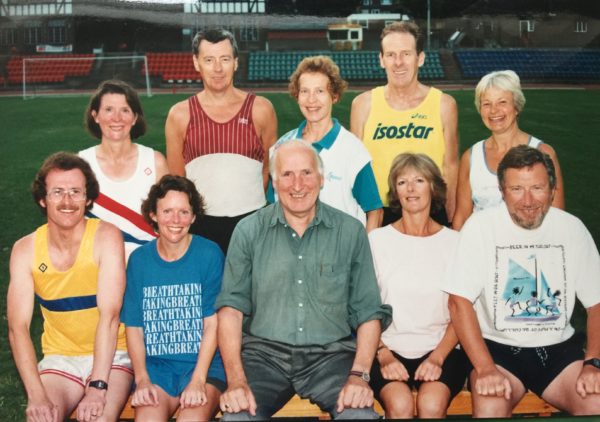