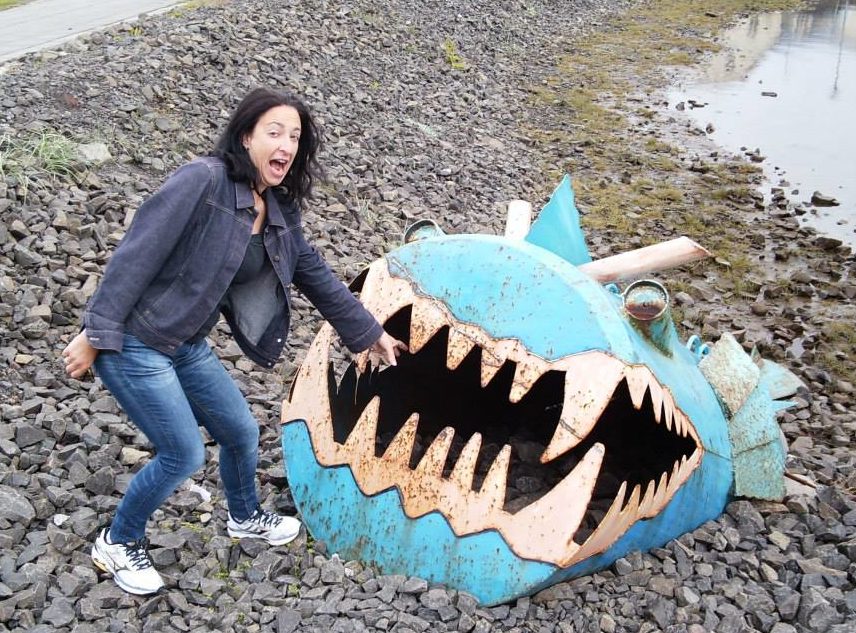 For today’s chosen old school club member we’re joined by one of the long standing members Sarah Silberston. Previously a regular Monday/Wednesday night attendee, however life/work/family have all got in the way of regular sessions and she’s now more of an ‘as and when’ runner’. Sarah has recently been managing to get to the Monday night sessions at Withdean along with her son Jack who is the club’s youngest member who has a lot of potential. So let’s find out a little more about Sarah.
1. When and why did you join Arena:
I joined around 1989 (yes, almost thirty years ago!). I’d belonged to a club in London that only had two longer distance women runners, so when I moved to Brighton I looked for a club that had a strong and supportive women’s team.
2. How long have you been running?
Over thirty years.  I used to run 5-6 times a week and race every weekend, now I’m lucky if its 5-6 times a month.
3. Where did you grow up:
Kensal Rise in NW London.
4. Other than running, what else do you do for exercise:
Are you kidding, I can just about cope with running!
5. What is a good night out for you:
A good night in is what I aim for – watching a Scandi drama with my man and a wee dram.
6. Tell us about something that you are proud to have achieved:
My 3:13 marathon PB in London 1993.  It was my first marathon, I was on a real high for weeks after, and at the time I though I could only get quicker.  Unfortunately all my marathons got progressively slower, but no-one can take that 3:13 away from me. Oh, and having my kids.
7. If you could only have one food for the rest of your life, what would it be:
Pasta with courgettes and pesto sauce.
8. What are the 3 most used apps on your phone:
Not really an app person, but probably endomondo, a parking app, and facebook
9. Who is your sporting hero:
Can I have two?  Firstly, Glenn Hoddle (COYS).  Secondly, Steve Ovett.  My dad took me to see him run around 1989 in a Fire Services athletics meeting.  Not only did he win, but he gave his prize to the person that came last in the blind runners race.  When I first moved to Brighton, it was a buzz to know that I was training at the track he’d trained at.  I always preferred him to that other bloke.
10. Have you ever done anything that scared the living crap out of you:
Last year I went with a friend and our kids to an adventure centre. We chose the low ropes course, but as we started we saw that the ropes were anything but low, and my friend bailed.  I had to keep going as the kids need an adult with them.  Then my daughter started to panic just after we’d started, but conveniently far enough along so that we couldn’t turn back.  I spent the rest of the course encouraging her to keep going, whilst quietly panicking myself.  When we eventually got to the end, my fingers were streaming with blood from gripping the ropes so tightly.
11. Have you ever had or do you have a nickname:
Several which I don’t wish to share!
12. What makes you happy:
That’s easy – my kids and my man.
13. What is your all-time favourite film:
Midnight Run.  Robert De Niro’s first (and most successful) foray into comedy, a brilliant double act with Charles Grodin – check it out.
14. What does running mean to you:
Its part of my identity, makes me feel alive.
15. What’s something we don’t know about you:
I was a child model/actress!
16. Tell me about something you would happily do again:
Definitely not run a marathon!.  As they are no longer around, have a hug from my mum and dad.
17. What would your epitaph say:
Was still running at 100 years of age!
18. Have you got something that you just can’t bring yourself to get rid of:
Two stone in weight.
19. What is your one weakness:
Food
20. What were you like at school:
Swotty and sporty.
Our biggest thanks to Sarah for her Q&A’s today and we hope that you feel that you have now got to know Sarah a little better. Check back tomorrow as we bring you another old school club member with another set of Q&A’s.