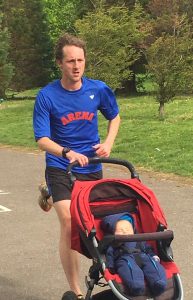 For this weeks chosen club member we are joined by the Preston Park parkrun resident Mr Jim Risdale. A firm favourite amongst his running peers and always guaranteed a fast run up against this man. A devoted and loving father, a dad of the highest order and very much a family man, who wouldn’t want Jim on their Christmas card list. A top bloke so let’s meet the Family Guy Mr Jim Risdale.
Name: Jim Risdale
1. When did you join Arena:
Spring 2011, off the back of the Brighton Marathon. Charlie (my partner) and I went along to the Sunday morning marathon training runs and met a few Arena members there. They were friendly and quite persuasive, so we joined.
2. How long have you been running:
I did my first parkrun in 2009. I was chatting to a friend in the pub and she mentioned that there was a weekly 5k in Hove Park. I feigned interest but Charlie was keen and didn’t want to go on her own, so I became a parkrunner!
3. Where did you grow up:
Northampton. I came to Brighton for university in 2000, then lived in Leeds for a while but moved back to Brighton full time in 2007.
4. Which three words describe you best:
Lacking self discipline! I should run more, eat fewer Hobnobs and go to bed earlier.
5. Apart from running what else do you do with your free time:
I spend most of my free time engaged in mundane household tasks or DIY, but secretly I love it. I also love building stuff out of Lego with my two-year-old. His enthusiasm is infectious, although his attention to detail and appreciation of symmetry is severely lacking.
6. What’s the best thing that’s happened to you this week:
I was hunting for mice in the loft and came across my old guitar, so I’ve decided to start playing again after a break of about 15 years. Call it a mid life crisis, if you will.
7. Tell me about something you would happily do again:
Run the entire Isle of Wight coast path. Only this time I’d do it in multiple stages instead of trying to do the whole lot in 24 hours and getting drunk at the half-way point. Blame Al Silvester for that one!
8. What was your favorite subject at school:
For a while it was Art, then Technology. Never Geography though, which is what I went on to study at university.
9. Who is your sporting hero:
Well, it’s got to be Mo hasn’t it?
10. Have you gone out with mismatched socks on:
I wouldn’t have thought so, no.
11. Have you anything on your bucket list that you still want to do:
Run a sub-17 5k. I’ve come fairly close this year but it’s proving elusive, probably due to the acts of self-sabotage described in Q4!
12. What is your favorite drink:
Ale. Harvey’s Best in a pub, or St Austell Proper Job when at home. Port too.
13. Have you gone in to a room and forgotten why:
Regularly.
14. Name 3 people (dead or alive) you would like to sit in a pub with:
My brother, who sadly I rarely see but can beat at pool. My partner Charlie, who doesn’t engage in binge-drinking anymore but might join me for a half. If I had to choose someone famous then it’d have to be Channel 4 Newsman Jon Snow.
15. Tell us something we don’t know about you:
I watch Gardener’s World every Friday evening.
16. Apart from your wife, who would you choose to be marooned on a desert island with:
Well, we’re not married, so I guess I’d have to say Charlie!
17. Which came first the chicken or the egg:
I don’t like eggs (apart from Easter Eggs) but I do like chicken, so I’m saying chicken.
18. Which time period would you visit in history:
I’d go back to my first term at university and tell my younger self to lay off the Smirnoff Ice.
19. If you didn’t run what other sport would you like to have done:
Rugby, darts or maybe the triple jump. But sadly I don’t have the physique for any of those!
20. What was the last book you read:
Exit West by Mohsin Hamid. I’m only half-way through but enjoying it thoroughly.
Our biggest thanks to Jim for his Q&A’s this week and we hope that you feel that you have now got to know Jim  a little better. Check back next Wednesday for another set of Q&A’s with our chosen club member.