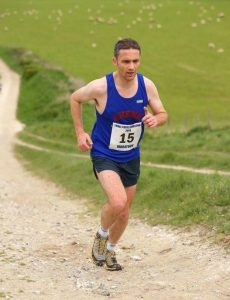 For this weeks chosen club member we are joined by one of the club’s many perennial marathon runners. Although injuries have meant he’s been absent from summer training, the comeback has started with a late surge up the super series rankings. Somebody who loves nothing better than a long run on the Downs, Andrew is now planning to step-up to Ultra Marathons. When it comes to an intellectual athlete, there is none better than this man, you will definitely have an intelligent conversation with this guy and above all else he is a damn nice guy so let’s see what Andrew is all about.
Name: Andrew Bargery
1. When and why did you join Arena:
In 2013. I was getting close to breaking the 3-hour marathon barrier and wanted some more support for my training.
2. How long have you been running:
I’ve been running since primary school. However, it had got to the stage I was only going for a jog every few weeks. It was a combination of the Brighton Marathon and parkrun that got me taking it a bit more seriously again.
3. Where did you grow up:
In the Isle of Man. It has a big sporting culture and is great for running and cycling. It’s a bit parochial though – it didn’t get it’s first escalator until after I left.
4. What is something you want to do in the next ten years:
Get older quicker than I get slower – so that I become more competitive within my age-group
5. What do you think was the most important invention in the last 100 years:
The space-race was responsible for many important innovations. So it must be either the silicon chip or the non-stick frying pan.
6. Where was your profile Facebook photo taken:
On holiday in Denmark. Although it’s just a head-shot, so it could be anywhere.
7. You have charge of the TV remote, what are you watching:
Channel 4. Or BBC4. Or maybe ITV4. Anyway, the ‘4’ button on my remote is quite worn.
8. Tell us about something you’re proud to have achieved:
I ran a 37 minute 10K when I was 17, so I was really pleased to go sub-37 last year and know I am fitter now than I was as a teenager.
9. What music are you listening to right now:
I don’t listen to music that much. I never have any music when I run. My car radio is permanently tuned to Radio 4.
10. Do you have any superstitions:
No.
11. Quote a line from one of your favourite songs:
And all you need, honestly, a little piece of cherry pie hot from the oven. (lovely song, rubbish lyrics) (admin says “it’s by The Jezabels – A Little Piece”).
12. What is your one weakness:
My right achilles tendon
13. What’s your favourite way to relax:
Unsurprisingly, running 20 miles over the South Downs.
14. What’s something that you aren’t:
I am not getting any younger
15. What’s something we don’t know about you:
I was a professional rally co-driver for many years and won several national championships.
16. Have you any regrets:
I’ve had a few. But then again, too few to mention.
17. What makes you bored:
Airports
18. What do you get excited about:
The dark
19. What scares you
Battery level below 10%
20. Who do you admire:
Elon Musk
Our biggest thanks to Andrew for his Q&A’s this week and we hope that you feel that you have now got to know Andrew a little better. Check back next Wednesday for another set of Q&A’s with our chosen club member.