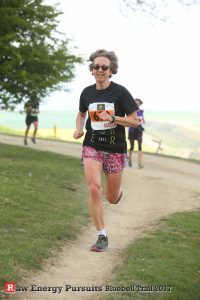 For this week’s chosen member we are joined by one of our very talented over 50 athletes. Since joining Arena Jackie has taken part in many of our club races as well as Arena team races and the Harvey Curtis Cup races. It’s fair to say that Jackie will always be up there amongst the top in her age category as well as placing exceptionally well in the overall placings. Jackie is a fine example of seeing progression made since joining Arena and you just need to look at her times to see how much of an improvement there has been. A lady that seems to have a permanent smile on her face and a lady that has slotted right into Arena with ease. Now let’s find out a little ore about her.

Name: Jackie Rymell
1.    When and why did you join Arena:
I joined Arena in 2015 after I had met Anne Miners lining up to start the Brighton ½ marathon.  She persuaded me that being in my 50s was not an excuse not to join.  Also, the women’s South Downs relay team were in need of a reserve so I signed up and ended up running the SD relay as my first Arena event!
2.    How long have you been running:
Only really since I had my children (who are now 17 and 15, so actually quite a while).  I did do the Sport Aid “Run the World” in Hyde Park 1986 (which seemed like a marathon at the time but was only 10km), then ran the London marathon in 1997 and 1998 (after my friend’s son had died of leukemia aged 8 so I wanted to do something to fundraise in his memory), but I was definitely not a runner then.  After I had children, running was one of the few sports that I could do without any planning, so I bought some running shoes and headed off when I got a chance.
3.    Where did you grow up:
Wallington – a very boring suburb in South London, near Croydon.
4.    What was the best thing about growing up as a kid:
climbing and falling out of trees (I fell out a lot).
5.    Apart from running what else do you do with your free time:
I play netball, swim and cycle, and am also doing a French course.
6.    What is your one weakness:
I have loads of weaknesses – probably my worst is taking on too much.
7.    Tell me about something you would happily do again:
Cycle from Lands End to John O’Groats.
8.    Have you any bugbears:
Gender stereotyping – especially when it comes to children’s clothes and toys.
9.    Who is your sporting hero:
Jesse Owens.
10. What would your epitaph say:
Pass.
11. What’s the best thing about living in Brighton:
There are so many great things about Brighton, but swimming in the sea and running on the Downs are pretty high up the list.
12. What would be the hardest thing for you to give up:
I think that would have to be red wine!
13. If you could visit any country in the world, where would you go:
Vietnam – to cycle along the Mekong River.
14. What was the first song you ever purchased (be truthful):
“Merry Christmas Everybody” by Slade and “I wish it would be Christmas every day” by Wizard.
15. Tell us something we don’t know about you:
I formed part of the first “N” in MORNING for the “Good Morning Britain” show on ITV when it was launched in 1983.  I was a student at Bristol University at the time and they filmed it on the Downs near where I lived.
16. If you could be anywhere right now, where would you choose to be:
Cycling up Mont Ventoux (pretty near the top!).
17. Apart from your children what has been your biggest achievement in your life so far:
Finishing my MA in Employment Law which I did by distance learning and had my daughter part-way through, so had to do my assignments with her bouncing on my lap.
18. Apart from your family, who would you choose to be marooned on a desert island with:
someone with good survival skills.
19. Is there anything that you are scared of:
Rollercoasters.
20. If you could have dinner with three people dead or alive who would you choose:
Rosa Parks, Paula Radcliffe and Millicent Fawcett.
Our biggest thanks to Jackie for her Q&A’s this week and we hope that you feel that you have now got to know Jackie a little better. Check back next Wednesday for another set of Q&A’s with our chosen club member.