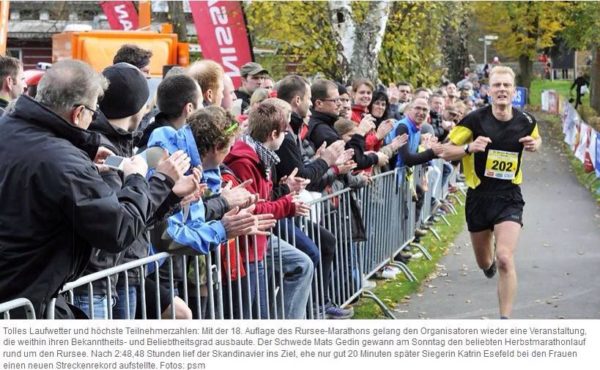 For this week’s chosen club member we are joined by one of Arena’s finest and another of our longer serving members Mr Mats Gedin. Mats has been a member for more than 15 years, when he joined Arena way back in 2002.
He moved away from the UK in 2012 but still makes the club honour, by running for Arena around the globe. He works for Ericsson in Sweden but spends most of his time travelling around, mostly in Europe, so the training environment varies hugely which makes it far from boring and so far he has always managed to get home safely.
Even though nowadays Mats is working outside the UK, he still has family in the UK and frequently manages to get back to see them and can always find time to squeeze in a local run.
Between 2002 and 2012 he was very much a part of the racing scene as he represented Arena in many races. His accolades include winning the Sussex Grand Prix in 2006 as well as being crowned as the best Sussex athlete in several marathons. Indeed Mats still holds a couple of places in the Men’s club records that being in the 10k – 34.13 and in the marathon – 2.37.49 so you can see he was certainly a big asset representing Arena. Now let’s dig a little deeper to find what keeps this club stalwart up and out there.
Name: Mats Gedin
1. When and why did you join Arena:
I came with my family to UK in 1996 and had never even considered joining a running club, However, my wife started with Arena80 in the late 90’s and I joined the club in 2002 as I wanted to start more frequent racing and with a team. Unfortunately, shortly after I joined, she had to stop her running career due to injuries.
2. How long have you been running:
I used to play football in the summer and complimented with handball in the winter to avoid preseason running, as I did not like it very much. As warmup for matches I used to run several laps on a local track under the minute though. (No one told me that was good times without training).
In 1984, I started running more frequently after a severe car accident, with sporadic races.
3. Where did you grow up:
I grew up in the south part of Stockholm and moved to a small harbour town just south of Stockholm in Sweden when I was 6.
4. Any thoughts on the modern day running in comparison to when you started out:
Running and athletics in Sweden when I grew up was mainly for freaks or people not good enough for the football or Hockey teams. Today, talent goes first, whatever the sport and running and athletics is a sport for heroes. HUGE difference!
5. Name 3 people you would like to with you at the dinner table:
My wife and my 2 children of course.
6. What’s your favourite film/book/album:
Bill Brysons book “A short story of nearly everything”  and Linkin park type of music.
7. What do you consider to be your best ever race:
Must be my first London Marathon on my own in 2002, running with no tactics and no idea of what a marathon does to you and I finished in 2:38 about 30 minutes better than expected. And of course winning the tough Rursee marathon in Germany in 2014.
8. If your best friend described you what do you think they would say:
Boring, stubborn and keeps away from the beaten track.
9. You can go back to one moment in your life, where would you be:
Avoid my car accident life change in 1984.
10. What would be the hardest thing for you to give up:
Running and not be able to enjoy the country side.
11. Apart from running what else do you do with your free time:
Whenever I can I go to my summer house in the Archipelago southeast of Stockholm.
12. What do you think was the most important invention in the last 100 years:
Computers and the web.
13. How did you feel when your son Timmy first beat you in a race:
Has he beaten me??? (Admin says: there is a whisper going around that a young Timmy Gedin of 17 years of age beat you for the first time at the Goodwood cross country race in 2008!…Just Sayin’).
14. How have you kept your motivation to keep running after so many years:
Way of life, stress limiter and great if I can beat the youngsters.
15. Tell us something we don’t know about you:
I am left handed but writes using my right hand.
16. Who is your sporting hero:
Try not to have any heroes, as I just get angry when find them on drugs.
17. What would you say to your younger self:
Enjoy the moment better.
18. What were you like at school:
Terrible outside the classroom. Very competitive and sporty.
19. What is your one weakness:
I cannot stop the clock.
20. Have you anything on your bucket list that you still want to do:
Spend a few weeks in the wilderness in the north of Sweden.
Our biggest thanks to Mats for his Q&A’s this week and we hope that you feel that you have now got to know Mats a little better. Check back next Wednesday for another set of Q&A’s with our chosen club member.