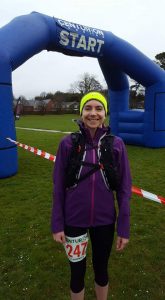 For this week’s chosen club member we are joined by Helen Moss. Helen has been with Arena for just over a year and initially started with the Thursday night training sessions. Helen said that the hardest thing in 2016 was joining a club where she didn’t know anyone and had a few self doubts about her running in an athletics club, a fear I’m sure we’ve all gone through when we joined Arena as well. Despite this, Helen is now a regular fixture on Monday’s and Thursday’s and we have seen her running and times improve immensely. In the latter part of 2017 we saw Helen entering more races, events and socials and in her words “met some great people at Arena” well Amen to that sister. Helen is another those members who has fitted in to the club like a hand in a glove and is a great addition to the club as well as to the ladies team. Now let’s find out what makes Helen Moss, well, Helen Moss.
Name: Helen Moss
1. When and why did you join Arena:
I joined Arena in October 2016 after trying out some Thursday sessions. I’d spent a year training for events on my own and it was getting harder to motivate myself as a result so decided to join a club and while looking at options, Arena appealed to me the most and it has not disappointed!
2. How long have you been running:
I ran cross country and track at school but neglected it in my teens and early 20’s. It was only in mid 2012 when it became something I started to commit to and began to really enjoy.
3. Where did you grow up:
I was born in Denmark and grew up in various locations in Asia before coming to England when I was 14, living in Sussex.
4. What do the last five words of the last text sent to you say:
“Not going to be in?”
5. What types of holidays do you prefer:
Any holiday! Snow, sun, city, country, camping, I’ll take them all!
6. How long does it take you to get ready to go out:
I have absolutely no idea.
7. What are your running goals for 2018:
To run a sub 20 min 5km and complete a multi stage ultra… or two.
8. What do you think about the most:
The trinity: running, food and beer.
9. What makes you bored:
At the moment, unfortunately, it is work.
10. What would be the hardest thing for you to give up:
I feel as if my answer should be running… and also bacon. And ice cream. See Q12.
11. What were you like at school:
Top marks in procrastination!
12. What is your one weakness:
Snacking.
13. Who was you first celebrity crush pop star and film star:
Hmm… I think Taylor from Hanson and possibly Leonardo Di Caprio.
14. Grab the book nearest to you, turn to page 81, and find line 12, what does it say:
“Shards of sweat keep stinging at my eyes, blurring them up.” – Footnotes: How running makes us human. Vybarr Cregan-Reid.
15. Tell us something we don’t know about you:
See the other 19 questions.
16. Who is your sporting hero:
She is more of an inspiration to go out and run and enjoy it, it’s Susie Chan. She only started running in her 30’s but has achieved so much, is always smiling and has run in some epic races that are on my bucket list.
17. Did you ever keep a New Year’s resolution:
They’re more aspirations than resolutions but no, not that I can recall. Maybe 2018 will be different…!
18. Apart from running what else do you like to do in your free time:
I’m not the best at time management but I enjoy cooking and baking so my free time is mostly spent in the kitchen if I’m not running. However, we’ve just moved so the New Year brings new weekend entertainment in the form of decorating.
19. Last gig you went to:
Trombone Shorty in London, it was brilliant!
20. If you could have any job in the world, what would it be and why:
Something that either involves being active or travelling or combines the two. I love both and find sitting all day in an office can get tedious.
Our biggest thanks to Helen for her Q&A’s this week and we hope that you feel that you have now got to know Helen a little better. Check back next Wednesday for another set of Q&A’s with our chosen club member.