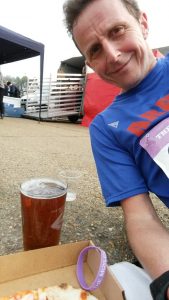 For this week’s chosen club member we are joined by a man who quietly goes about his sport and his much respected by his peers. He is someone who is no stranger to doing a marathon or two. Indeed he got a cracking PB at the Brighton Marathon last year when he clocked in at 2.56.53 in 69th place. He also did the Snowdonia Marathon Trail in July where he placed 2nd in the V45 with a time of 4.51.18, have you seen that route? So it’s clear that he doesn’t do things by halves. A really nice guy to go with all his running accolades as well so ladies and gentlemen please give a big warm welcome to Mr Kevin Price.
Name: Kevin Price
1. When and why did you join Arena:
It was around June 2015, after years training solo I’d finally hit my marathon goal and was a bit lost what to do next. I hoped joining a club would help me find new challenges and freshen up my training.
2. How long have you been running:
Since around my 30th birthday when I persuaded some mates to all sign up for a 10k.
3. Where did you grow up:
Glastonbury, Somerset.Hippy by birth.
4. What was the last thing you bought:
It’s Christmas shopping time so a new footie goal for my son …..And a new thermal running top for me.
5. Are you scared of spiders? If no to what size would you pick one up?
Yes. I have a healthy fear of anything that can kill/maim me.
6. What were you like at school:
Short and lazy. I’ve since got taller.
7. Tell me about something you would happily do again:
Pretty much climb any mountain or hill that I’ve been up before. There’s nothing like that summit feeling.
8. Name 3 people that you would have round for dinner (living or deceased):
Right now it would be the explorer and all round legend that is Ranulph Fiennes, and the incredible trail running couple Kilian Jornet and Emelie Forsberg.
9. Tell us about something you’ve achieved:
Somerset county scouts draughts champion 1981.
10. What’s your favourite book, magazine or comic:
Like the Wind magazine is great.
11. Tell us something we don’t know about you:
I was runner up in the 1980 Somerset county scout’s draughts championships.
12. What makes you happy:
Running on the downs especially during a summer rain shower although that seems so long ago now.
13. What do you do to relax:
Running, cycling, swimming and drinking.
14. If you could try out any job for a day, what would you like to try:
An Astronaut just for the views.
15. Which store or website would you choose to max out your credit card:
Expedia.
16. What is most important in life:
Freedom, family and friends.
17. Who in your life has influenced you the most:
For me this changes through life, recent years it’s been my kids.
18. What’s your earliest memory:
Our kitchen ceiling falling down and the subsequent dust cloud.
19. Name your 3 favourite foods:
Cheese, apples and chutney.
20. Who is your sporting hero:
Lots of them but recently Kilian Jornet the ultra-runner/mountaineer who earlier this year ran up Everest unsupported, got sick on the way down rested a couple of days then did it again. 3 months later he won the hard rock 100 mile race despite falling and dislocating his collarbone and running the last 85 miles with his arm in a sling.
Our biggest thanks to Kevin for his Q&A’s this week and we hope that you feel that you have now got to know Kevin a little better. Check back next Wednesday for another set of Q&A’s with our chosen club member.