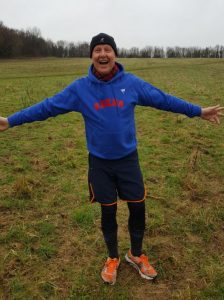 For this week’s chosen club member we are joined by a true gentleman of Arena 80, Shawn Buck. Shawn has been with the club for a few years and is always one of the first members to offer his services to the club when we call upon help. Shawn has now stepped up to take on the club role as a WSFRL rep alongside Fiona Jamie and Anne Miners in which he hopes to help promote these races. He is also Run Director at the Brighton & Hove parkrun so he is a man that definitely gives back to the running community. Now Mr Buck let’s hear what you have to offer us this week.
Name: Shawn Buck
1. When and why did you join Arena:
In Autumn 2015.  I had taken up running the year before (parkrun at the age of 56) as a way of losing weight and improving my levels of fitness.  My friends from Brighton & Hove parkrun, Caroline Wood, Mark Stevenson, and Trevor & Kevin Day persuaded me that Arena was the friendliest athletics club in Brighton – and they’re not wrong!
2. How long have you been running:
Four years.
3. Where did you grow up:
I was born in Kingston upon Thames, and went to school in Merton, near Wimbledon.
4. What advice would you give to someone just starting out running:
Never underestimate your ability and take it slowly at first. I ran my first parkrun in a time of 32:44 and was absolutely knackered afterwards.  Within a year I’d recorded a 21:57 PB (my times have slipped somewhat of late due to various injuries etc, but not as far as 32+ minutes!).
5. If money was no object what one thing would you do:
I would love to visit Antarctica – and have an old K6 telephone box installed in my garden!  (OK – I know that’s two things, but they’re not too demanding, I hope!).
6. Have you any fears or phobias:
No phobias – but I don’t like vain, bigoted, or ill-mannered people.
7. Grab the nearest book or magazine, turn to page 33, and find line 10, what do the first 10 words say:
‘Take notice, guard – he tried to murder me’, were his first words.  (Great Expectations; Charles Dickens).
8. Tell us about something you’re proud to have achieved:
Running the Brighton Half-Marathon in under two hours, when I had to hobble the last 3k because of an injured hamstring.
9. Who is your sporting hero:
Ooh! – I have a quite a few.  From athletics Mo Farah, Steve Ovett, Kelly Holmes, Jo Pavey, and Tanni Grey-Thomson.  Cycling: Laura Trott, Bradley Wiggins, and Chris Hoy.  Football:  Pele, Bobby Moore, Maradonna.
10. Looking back to your teen years, how were they:
Apart from a hiccup when my parents divorced, they were pretty happy.  Kids had a lot more freedom then, even though we were less well-off.  I’m still friends with many people from my schooldays.
11. What do you think about the most:
My friends and family.  I worry about how mankind is trashing our planet but am heartened by how many good people there are too, trying to put things right.
12. What’s the worst pain you’ve ever had:
Lower back pain about ten years ago. Fortunately; it only lasted a couple of weeks.
13. When are you at your happiest:
When I’m out walking/running/cycling in the countryside or by the sea with my partner Agnieszka and/or in the company of good friends.  I also love long rail journeys to beautiful places (Scotland, Cornwall, Switzerland etc.) – but I’d rather not do it on an uncomfortable Thameslink train!
14. What’s something that you aren’t:
Materialistic.
15. What’s something we don’t know about you:
I’m a Morris dancer (but not the only one in Arena).
16. Where were you on Saturday night:
With Agnieszka in a bar and restaurant on the promenade in Gdynia, Poland.
17. What makes you go wow:
Spectacular scenery.  Seeing animals and birds in their natural habitat.  People who overcome adversity to achieve great things (Stephen Hawking, Martin Luther King, the Invictus Games competitors and Paralympians….).
18. What would be the hardest thing for you to give up:
Ale.
19. Do you have a nickname:
Friends call me Bucko – but my Brighton Morris mates call me ‘Shiny’.
20. What would your epitaph say:
He always tried his best – shame about the crap jokes!
Our biggest thanks to Shawn for his Q&A’s this week and we hope that you feel that you have now got to know Shawn a little better. Check back next Wednesday for another set of Q&A’s with our chosen club member.