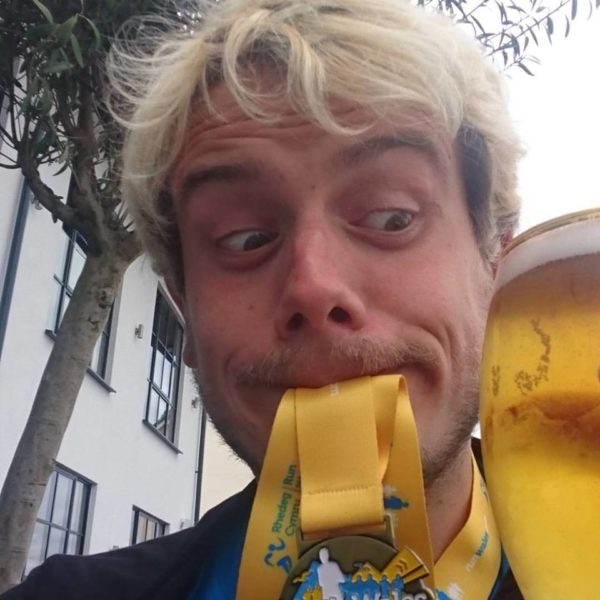 You will all know Sam by sight if not by name with his love of blonde hair. Sam has been one of those members who we’ve watched over the last year or so and his progression has been a credit to himself and of course to the Arena training sessions. If it was speed he was after then he has achieved that as many of his race results will now show. Sam is a gentleman and a confident young man and an asset to the club. Now let’s find out what the man is all about.
Name: Sam Bretherton
1. When and why did you join Arena:
After a couple of years of running without seeming to get any better interspersed with injury I thought I’d give a proper running club a go! I heard that Arena was the best around! Since then I’ve been slashing all my PBs so it seems to be working. What I hadn’t appreciated – until I did Bright10 last year – was the level of support you get running round in an Arena shirt. Amazing motivation! I got PBs at 5k, 10k and 10 mile in that race!
2. How long have you been running:
Since January 2015, I wanted to run the Brighton Half but it was sold out, so I got a charity place with WaterAid for the Brighton Marathon.
3. Where did you grow up:
Out in the mean fields of Somerset, scrumping apples and drinking cider
4. Which three words describe you best:
Laid back or easy-going would be 2 of them.
5. Apart from running what else do you do with your free time:
Climbing/bouldering. Like running you get to spend time in beautiful surroundings but unlike running you get to stop and appreciate the view for a bit longer!
6. What one thing are you looking forward to in 2018:
Looking forward to Brighton marathon all going well… but nervous that it won’t!
Just organised to take a couple of months off work towards the end of this year so me and the gf are going to go off gallivanting for a bit. Don’t know where yet… the world is our oyster I guess.
7. Tell me about something you would happily do again:
Bouldering in Fontainebleau on a sunny day – Relaxing on white sands in the middle of a forest with a baguette and cheese!
8. What was your favourite subject at school:
Maths, it’s all I was any good at.
9. Who is your sporting hero:
This changes through time. As a kid it was Robbie Fowler but then I fell out with football. Now, maybe Alex Honnold? He’s a climber who has done some absolutely mad feats in free soloing, just watch this from about 3 minutes in: https://www.youtube.com/watch?v=Phl82D57P58. No runners in this list apart from all the heroes at Arena that I get to run with every week!
10. Which time period would you visit in history:
The 90s (which obviously I was alive for) but being in my 20s in the 90s. Between BritPop and all the big beat music of that time, I think it would have been a lot of fun! Also, people seemed a bit happier back then in general… but what do I know, I was a kid and if you got to go to the park at the weekend life was f#@&ing great!
11. What was the last film you watched:
think it was Training Day
12. Have you anything on your bucket list that you still want to do:
Does a bucket list have to be achievable? Climb in Yosemite National Park, run a sub-3 marathon, see Daft Punk live. I’d like to go skiing, that one’s achievable. I’m hoping to come up with and check off more when planning my trip this year.
13. First song you ever purchased:
Wheatus – Teenage Dirtbag. Their cover of “A Little Respect” was on that album… it’s not a great cover but was my first introduction to Erasure
14. Name 3 people (dead or alive) you would like to sit in a pub with:
Hmmm… someone from music, Brian Eno – composed the Microsoft start-up sound (all 3¼ seconds of it) amongst other things or maybe David Bowie, ask him if he took multi-vitamins while he was on his diet of red peppers, milk and cocaine.
A comedian, Sara Pascoe or Paul Merton.
Someone from cooking… Raymond Blanc perhaps. Just seems like the jolliest man ever! PLUS he can make the snacks.
15. Tell us something we don’t know about you:
I lived in Spain for a year when I was 5. Didn’t keep up my Spanish after returning though.
16. What was your favourite toy as a kid:
My Power Ranger Zords or Transformers! They are currently getting a new lease of life now I’ve given them to my nephew so I get to play with them again!
17. What was the last thing you bought:
I bought a fancy new Garmin. So many extra and unnecessary stats! It’s amazing!
18. Are you scared of anything:
China dolls freak me out. You know the sorts that watch you across a room.
19. If you didn’t run what other sport would you like to have done:
Well there’s climbing. I used to play Ultimate Frisbee but I’ve all but given that up as I wasn’t especially good at it.
20. What was the last book you read:
Hmmm… I don’t find much time for reading. I am currently reading my sister’s first novel Cursed Love Blues which is available to download on Amazon! Click here: Cursed Love Blues Sorry, shameless plug!
Our biggest thanks to Sam for his Q&A’s this week and we hope that you feel that you have now got to know Sam a little better. Check back next Wednesday for another set of Q&A’s with our chosen club member.