Plus a cheeky new improvement to the club records that went under the radar.
The records and PB’s recorded here are for the Hove Prom course only.
What a parkrun that was to watch, as far as the eye could see all the way down the Hove Prom was a sea of blue but not from the shoreline but from the blue vests of Arena.
You will have read Al Silvester’s run report already but I thought I would just add in a few extra stats to the race.
The previous parkrun series challenge held at Preston Park parkrun had 60 turn out with 17 new PB’s. The Hove Prom offered us two new club records and five new club record improvements.
We almost beat our record attendance for an Arena turn out (currently sits at 76) as we had 71 athletes turned out for this event with 23 claiming new PB’s and there were 4 first timers. I’m sure there is a race out there where we will get 100 showing up and I think it will be this year.
The first Arena man home was someone who had a slightly dodgy foot going in to this run so the intention for him was to try it out for a test run and not push it too hard, oh how I laughed when I heard those words coming out of Richard Clayton’s mouth, I mean when have you ever know Richard to not be competitive. Well I’m glad he took it easy ‘cough cough’ because he pushed his ‘current club record 16.22’ even closer to the sub 16 time as he finished in a time of 16.01. His watch had him at 15.58 but sadly we have to go with the parkrun time. His previous record he set here was in May 2017 and who’s to say there are not more records to come this year as Richard is in the form of his life and running so incredibly well at present. Just for an added stat on the 1st January 2018 Richard did this same run and his time then was 17.07 so the boys done good since then.
With Timmy Gedin taking 2nd Arena man with a top run out but our third Arena man home was someone who it seems has come from nowhere over the last few weeks it would seem and that’s Aled Anderson. Aled has recently been getting himself back out there and just a couple of weeks ago PB’d at the Peacehaven parkrun to claim a spot in the club records and he really is fine form. Aled’s previous best time here was back in July 2017 with 18.08 but move it on 10 months and he set himself a new PB time of 17.17, fine running indeed.
I would like to mention Henry Miller here. It’s pretty much a given that Henry is a big part of the Arena athletes and that he can score points for the club whenever he undertakes a race for us. He is well respected by all of his peers and can definitely hold his own in a race or when training at the track. I think sometimes though that it’s easy to forget that Henry is still classed in the junior category as his times certainly do not suggest this. His time of 17.59 was just 6 seconds outside of his previous best which he set back in July 2016 when he was 2 years younger, such a strong performer.
Ta 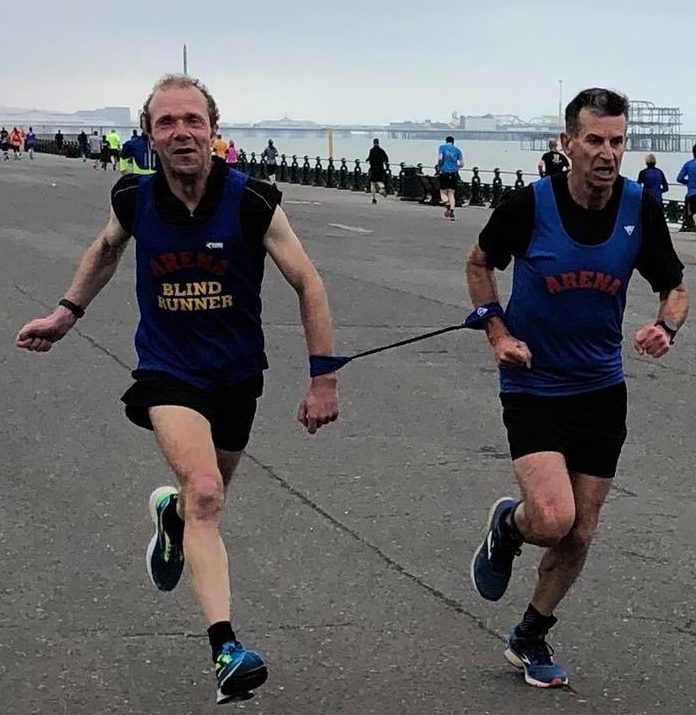 lking of Miller’s then we should all applaud Michal Miller who chaperoned our blind runner Keith turner for this event. I’m not sure if we can count Michael’s new PB time of 20.53, which beat his previous best of 20.54 set way back in October 2015, as it looked like it was Keith pulling Michael Miller around the course and if you could have seen the final run in, Keith was all smiles and Michael was looking for an oxygen tank. None the less it was a great thing to do from Michael and I’m sure Keith was most thankful to him and much respect given from Arena 80 to Mr Miller. I actually can’t remember the last time Michael did go under sub 21 so really well done under the circumstances. Keith’s time just for the record was 20.53 as well so Michael did not get taken at the line or didn’t want to give up his place at the line.
Looking further at the stats we say welcome to the sub 20 club to Juliette Roberts who took a minute plus off her previous best 20.38 set in June 2017 with a new PB time of 19.29. Also entering the sub 20 club we welcome Katie Wright who chalked up a new PB time of 19.51 which beat her previous best of 20.24 set here just one week ago.
The Arena men have 5 of the 56 athletes in the sub 17 club whilst in the women’s sub 20 club, the women hold 5 of the top 7 positions with 13 in the top 48.

The biggest PB gain of the day goes to Jessica Coleman and we say a massive well done on such a huge improvement. Jess’s previous best at this course was 30.20 set in March 2017 but she has totally smashed it with her new PB time of 23.50 and really well deserved having seen her put it in at the training sessions and nice to see her rewarded here.
Also Yvonne Patrick secures her third PB here in a month, taking her time down from 23.58 to 23.43. At the beginning of 2017 her time here was 28.52 so she really has made very strong progress and I’m sure we still have more to come from her yet.

Now on to the all-important, we’ve already mentioned Richard Clayton but there was also a massive PB coming from Tara Shanahan who is looking in incredible shape at the moment. Tara had a previous best of 18.57 set in July 2017 but took this time down to 18.17. This new time propels Tara to 3rd in the women’s Hove prom club records and as an added bonus she gets 2 for the price of 1 by also taking 3rd spot in the age grading records. A superb effort from Tara.
An improvement to the top of the men’s age grading records goes to Paul Gasson who having posted a time of 19.58, which is his fastest time here since October 2016, improves his lead at the top to 83.22% to maintain his first position, not bad for a VM60-64 athlete.

There is a new record set for the women’s age grading as Caroline Wood’s new PB time of 19.32, which is her fastest time here since November 2015, bounces her to top position with a new age grading record now set at an incredible 91.47%. Caroline seems to have found her mojo again and really has been putting in some fine runs recently, none more so than her recent club record set at Peacehaven parkrun a couple of weeks back.
Another improver to the women’s age grading records goes to the lady who very recently took on the Boston marathon in the most hideous conditions imaginable and she actually placed as a women’s top 5 UK athlete for her age group there anyway we digress. Nicky Yeates’ new PB time of 21.35 was her fastest time here since October 2016 when she clocked in at 22.14 so with this time it pushes Nicky up two places to 3rd spot in the records. Like Paul Gasson Nicky is another of the VW60-64 bracket athletes.
Now looking around at the other parkruns that were going on and yes we did have other Arena athletes elsewhere.
Brighton & Hove parkrun
Lovely to see one of our newer recruits to the club doing so well as Lucy May Richardson took the honours as first lady here in a time of 19.56. Hard to believe she is classed as a junior. Great work Lucy.
Our first Arena man home came from Richard West in 21.00.
Preston Park
Arena managed to field two athletes here with Jordan Hopkins as first Arena man in 19.26. No ladies at this event.
Bevendean Down
A Mr Tristan Sharp defected from the seafront to take on the trickier Bevendean course but put in a pretty good performance as first Arena man in a time of 21.12.
No ladies at this event.
Worthing
Well this one nearly slipped through the net with all the records going on at the Hove Prom there was a cheeky one happening over at Worthing. Gary ‘comeback king’ McKivett was first Arena man home in a time of 17.00. This is enough to put Gary in to the club records for this course and take the 5th spot for the men.
No ladies at this event
Worthing parkrun Men
1 James Dicks 2016 16m 29s
1 Alex Jago 2017 16m 29s
3 Al Silvester 2017 16m 37s
4 Joe Ashley 2017 16m 46s
5 Gary McKivett 2018 17m 00s
Looking further afield we had Michael Gibbons 29.42 representing at Tonbridge parkrun.
Ricky Coleman 18.30 and Jo Marshall 22.37 took in the delights of Krakow parkrun.
Jackie Rymell 23.21 ventured over to Brockenhurst parkrun.
Greenwich parkrun was the run of choice for Mark Dewdney 24.28.
Lovely to see the Areneez flying the blue flag elsewhere.
Huge congratulations to everyone involved this weekend. It’s amazing to see what happens when Arena come together like this and to see how many PB’s are racked up. Watching the race it strikes me how pairs or groups of Arena work together which certainly brings out the best in everyone looking at the times. You really couldn’t wish for a better bunch of athletes to run/train with.
The views expressed in this post are those of the web administrator only and not those of Arena 80 AC.