On Saturday 26th May Arena’s Michael Barker took on the London to Brighton 100km walk, jog, run challenge. Asked why he did it he replied “I wanted to challenge myself to something special and also not to worry about racing but to do something for me. Initially this was going to be a walk but having seen how long that was going to take I decided to run it so it would be over quicker”.
Michael went in to this with his longest training run being 33 miles but felt comfortable enough that he would be able to complete it, so had no worries about the mileage.
There were 2000 entries for this challenge which set off at 6.30am and went off in waves of 350. Michael was lucky enough to go off in the first wave and at that time of the morning, the weather was slightly cooler with a little bit of drizzle which Michael said was perfect for them keeping them cool. 20 miles in and Michael was feeling great with the birds tweeting, the grass looking splendidly green and really what was all the fuss about, it was a breeze. He had company around him and up ahead as well so it was all going very well, soon home for tea then! Michael carried 2 litres of water with him to keep hydrated and the route was really well sign posted. There were plenty of chivvy points along the way where they had food, drinks, a medic and you could even have a massage if you chose to, so really it couldn’t be any better.
By the time Michael had reached the 56km mark he was ready to quit. The hills had become monsters and he was now easing right off and walking up them to try to keep his energy and legs alive. The birds that were once tweeting had now taken to circling above him with their long wings waiting for him to drop. The green grass had now become a forest of branches all intertwining and as for the company, that had long gone and Michael was now all alone. Michael was unable to take on any food as he found it difficult to swallow and hold anything down. He was chomping on biscuits and crisps (just an ordinary day really Michael!) and doing whatever it took to keep himself going.
He had hit a point in the challenge where he was feeling very low. He soldiered on but when he got to Ardingly he got the biggest boost he could have hoped for. For it was here he saw a real vision of beauty, something he wasn’t expecting and which nearly brought a tear to his eye. He hadn’t been told who would be waiting to greet him there and got to put that smile back on his face; I mean who wouldn’t be bought to tears to see the faces of Dixie and Jago. All jokes aside though, Michael said that it gave him such a massive boost of confidence and reinvigorated him. What a great thing to do from our Arena boys, now that really does epitomise ‘supporting your peers’. He had a long chat with them before setting off again but this time with a bit more of a bounce in his step. 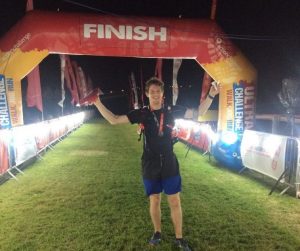 Now we do know that there were storms going off all about us that day. Michael could see the lightning in the distance over the Downs, as by this time he was running in the dark and with his head torch on.
Michael eventually finished his challenge at Plumpton College. His time was 15 hours and 28 minutes and he had finished in 109th place, not bad for someone who wasn’t racing it.
Needless to say that the next day his legs had decided to have a day off and he was finding it very difficult to walk and, as many of us will know very well, finding the stairs a little harder to navigate than normal. Oh stair god, why do you play these cruel jokes of yours on us mere running mortals?
Of course it was just Michael that was taking this on as I feel his wife should also take a little bit of the credit in getting Michael over the line. She will have supported him during his training runs by looking after their new edition to the family so Michael couldn’t have done without her so thank you Mrs Barker!
To sum it all up Michael gives this a massive thumbs up and highly recommends this one to anyone thinking of doing an ultra in the future. It was really well organised with everything catered for and with great support along the way. Would he do anything differently if he did it again (which he’s not Mrs Barker!!) then yes he would, by actually racing it.
Huge congratulations to Michael on a tick box achievement and certainly one to tell the kids about.
(Admin says: Have you got a race report that you would like to share with your club members? If so then email ).