Please find the race report from Ricky Coleman as he attempted his first 50 miler race that being the ‘Race To The King’. Such an Incredible attempt in the most searing heat you could wish for in a race. Having read this, they both have my ultimate respect on attempting this race in these conditions. It’s hard enough in the autumn or spring but in the middle of summer, I just couldn’t imagine what they went through. Read on for his full race report.
This weekend I set out to attempt my first 50 miler. It was a pleasant surprise to be joined by Mark O’Gara who signed up at the last minute and fancied a go after pacing Marcus for 30 miles of the SDW 100 recently.
We started well and got into a nice rhythm of walking the hills, running the flats and downhills and not hanging around too long at the aid stations. We covered the first 50k together at a good pace and felt comfortable. After a minor mishap at the 3rd aid station, when we somehow lost each other in the melee, we found each other again and pushed on through QE Country park. Butser Hill, at mile 30, was waiting and Mark was going strong a few hundred metres ahead. I was joined by Jo who accompanied me up Butser, then it was into the 4th aid station and after a refill of fluid and picking up some now unpalatable high energy food, I got on my way but fell into a bit of a bad spell and realised I was struggling in the heat.
Mark powered on and we crossed paths again at miles 37, the fifth aid station. Mark was in a bad way when I got there, the heat clearly having got to both of us now, and he was very low on salt. We tried to laugh off how were were both in dire straights, with Mark suffering from dizziness and me vomiting up any fluids I took on. Mark couldn’t carry on in that state. I was held back for a while by the medic who wanted to see me hold down fluids before I could continue. It was a bit of a difficult time but with some persuasion the medic let me leave, with Jo walking the next mile with me to ensure I was ok. It became a matter of forward motion, no matter the speed and my spirits were lifted to see Jo and Mark again at mile 41, Mark with the cool orange juice and lemonade I’d been fantasising about all the way around.
The next 22 miles were a blur of just trying to keep moving and counting down the miles. It was great to get to run a few miles here and there with Jo when I was suffering a bit, and with Mark again strategically placed with an ice cold drink around mile 47. It was a big team effort at this point and I’m very thankful for the guys for driving me along.
The crossing over the road outside Winchester signified 50 miles (51 by my watch!) and I was pleased to be able to run the last 3.5, getting past a few other runners before seeing Jo again for a joint run of the final 400 metres into the Cathederal, to cap off a long day and the achievement of a long held ambition. 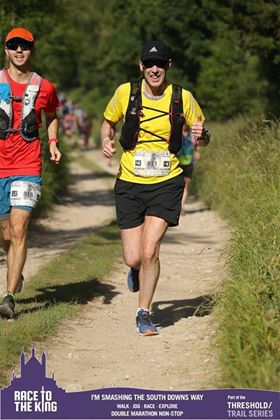