Monday 25th June saw the return of the annual Arena 3k track event which falls under the Super Series races.
The conditions were warm once again which has also been an annual event to go with the race. Now as many of us will know, the 3k race is a tad on the brutal side as there is really no room to pace yourself at this distance so it’s very much finding your optimum pace and holding out for the 7.5 laps of the track, tough tough and tough but for a spectators point of view, wonderful to watch the race unravel.
In the women’s race we had a slightly lower turn out than in previous years with 14 taking to the start line. We had the 2017 1st and 2nd place ladies taking it on once again, Tara Shanahan and Dani Tarleton so it was going to be interesting to see how they shaped up one year on. Actually it was a great field out there for the ladies and no place could be guaranteed looking through the list.
From the off it looked like Tara had that fire in her belly and it took just 1.5 laps for her to take control of the race. Tara, who has been in formidable form this year, looked so smooth and effortless and just never relented with her pace so as the race went on so did Tara who had opened up a good gap by the time she crossed the line in a time of 10.34 beating last years’ time of 10.54. 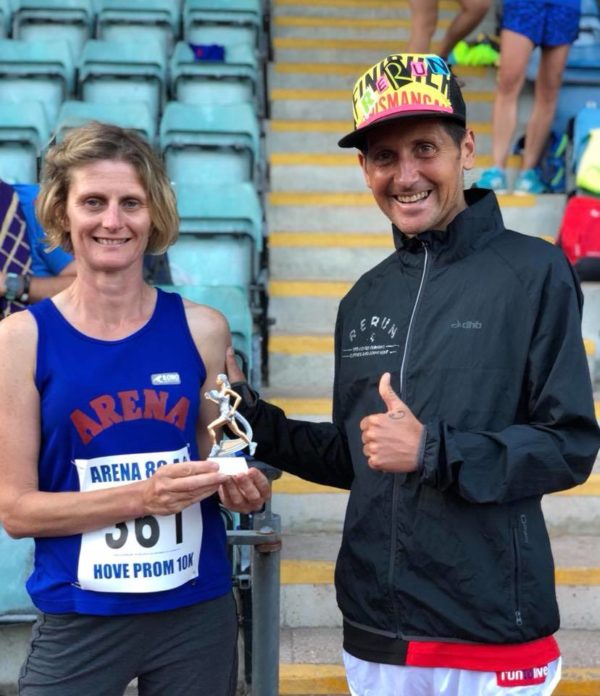 Dani Tarleton had another very strong and was never really in doubt of losing her 2nd place as she, like Tara, kept it smooth and strong with the gap to third place never dropping off. Dani took the 2nd place in a time of 10.53 also beating her last years’ time of 10.59.
Now with the other places behind Dani, well there were two races within themselves. The race for 3rd and 4th was being played out between Juliette Roberts and Helene Rooney. Initially it was Helene that took the lead but as the race went on, it was Juliette that was holding out for 3rd. both of these ladies were working so hard however it was Juliette who managed to hold it down the finishing straight to take 3rd place – 11.09 with Helene just behind her for 4th – 11.12.
So our first 3 finishers were all over 40 proving that there is so much racing still in the legs and that retiring from running is never an option.
The best race of the night though goes to the three ladies fighting it out for 5th/6th & 7th. Rebecca Knights, Helen Moss & Katie Wright were very much a run formation team in the early stages of the race and as the race went on it was Rebecca who started to look like she was edging away opening a gap of about 20m on Helen who in turn had opened up a 20m gap on Katie. This looked pretty much how it was going to stay as the gaps never grew but didn’t shorten either. However the last lap saw an incredible turn of form for the chasing ladies and coming in to the final straight the gaps were closing down very quickly. With 10m to go it really could have been anyone of the three that took that 5th spot as they all found some extra speed to take it all the way to the line. It was Rebecca who just managed to hold it together to take 5th place – 11.29 with Helen Moss breathing right down her neck for 6th – 11.30 and Katie Wright almost touching the heels of Helen to take 7th – 11.31, this was such an exciting race to watch and definitely the race of the night (admins view only of course).
For the men’s race this year we were joined by the 24 hour endurance GB team silver medallist Dan Lawson who was guesting in the men’s A race. Dan agreed to race as a big thank you to Arena for donating so much of their old running kit for their ReRun campaign. It’s not often you get a chance to go up against someone of this calibre and it would be interesting to see how an endurance athlete fairs in the speedier 3k race.
We had the 2017 champion returning to defend his title Richard Clayton who had some good opposition in this race with Joe Ashley and Anthony Snelling both showing very good form of recent. Again from the off it was joe and Richard who making all the headlines as they immediately took control of the race very early on. It looked like Joe was going to set the tone of the race as he led after the first 3 or so laps and looked like he might have been getting away from Richard but on lap 6 it all changed as Richard went by Joe to open a 5m gap and started to pile it on for the last lap. By the time Richard ad crossed the line the gap was about 15m or so and Richard had defended his title magnificently with a time of 9.18 beating last years’ time of 9.25. Joe, who it turned out was running with a slightly iffy ankle, came home in an excellent 2nd place with 9.24. 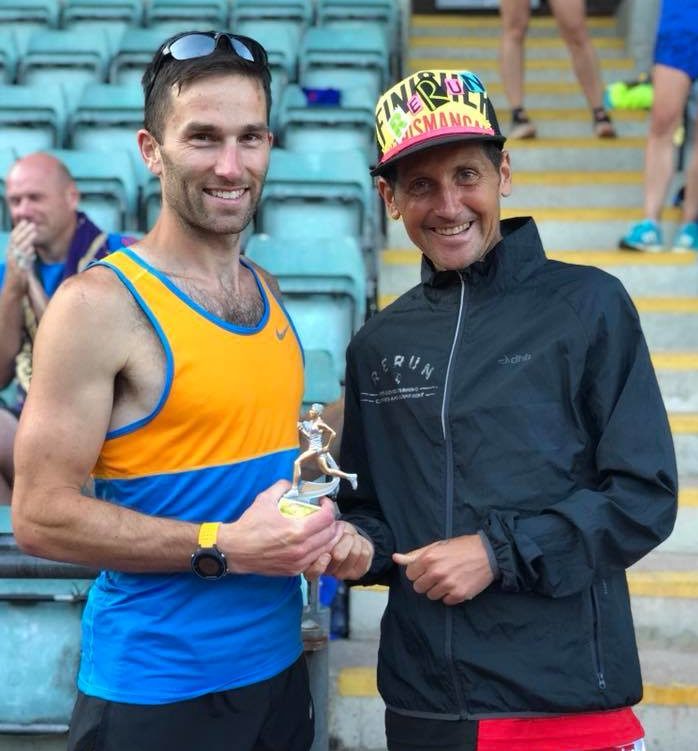 3rd place went to a very consistently paced Anthony Snelling – 9.39 (2017 – 9.41) who it seems had a game plan throughout the race. Anthony had actually written all of Richard Claytons splits from 2017 on his hand and was checking this after each lap. He just couldn’t hang on to the pace in the latter stages of the race but how brilliant was that of him.
Our guest runner Dan Lawson made up some incredible time in the last 100m and almost took Anthony towards the line coming home in 9.40 which proves that there is speed in those endurance legs after all.
And we should say a very commendable 5th place for Henry Miller who is now finally un-juniored (if that is a word) having turned 18 a couple of weeks ago who came home in 9.47 (2017 7th – 9.58).
As always a very well supported race with all of those on the side-lines giving maximum support for their fellow athletes which is always gratefully received and does help to give a little boost and lift for our athletes.
Congratulations once again to Tara and Richard for both retaining their titles and showing us how it’s done.
We would also like to thank all of the volunteers that helped on the night as without them there would be no race. It really couldn’t go on without them so thank you from us all. Just in addition to this, we would ask that when races are put on and we require volunteers, we would hope that many of you will step forward to help out. If you can’t run due to injury or you might be saving yourself then please step up to help your club out. We give our members so much and we ask for very little in return. These things can’t work unless we get your support back.
One final word must go to our race director Danny Cartledge who has now retired from his duties for this race. Danny has done a fantastic job organising this over the last three years and has now made this a must do event. He has set a high bar and we cannot thank him enough for developing this race to what it is today so on behalf of all of us here at Arena Danny, thank you for doing such a great job and it’s very appreciated.
We of course are now looking for someone to now take this event over. If you would like to get involved with this then please let Bob Page know you’re interested. A full handover will be given.