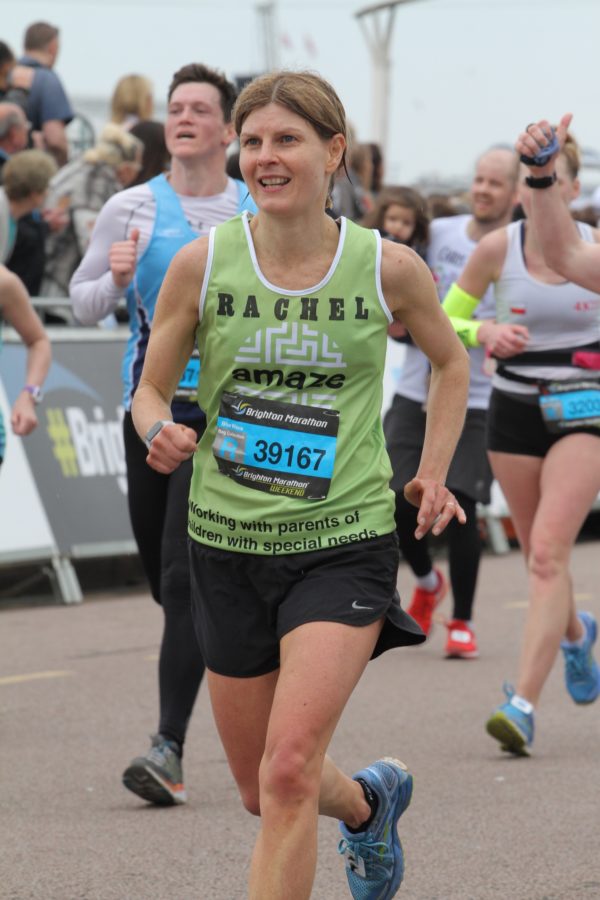 This week we are joined by well I would like to say fairly new member but it seems that as she joined in October 2017 and we’ve had a gazillion new members join since then, well she is ultimately now an old skool member. I don’t really know too much about Rachel which is a good thing as this is exactly what the club Q&A’s was set up for so as to get to know the person behind the name. What I do know is that she fits in to the Arena way as she is another one of those ‘always seems to have a smile on her face’ kind of people. She works hard in the training sessions and there has been definite notice of speed picking up. Now let’s meet the one they call Rachel Burgess.
Name: Rachel Burgess
1. When and why did you join Arena:
I joined Arena in October 2017. I had run my first race, the Brighton Half Marathon, in February 2017 and really enjoyed the whole experience. Having got the running bug, several people recommended joining Arena.
2. How long have you been running:
Up until December 2016, I had been leisurely jogging around. I’ve always enjoyed gently running to mull over things but I hadn’t done any long distances or races until then.
3. Where did you grow up:
I think of myself as Brighton born and bred but was actually born in Hull, spent a few years in Dar es Salaam, and then moved to Brighton when I was 4 years old.
4. Other than running, what else do you do for exercise:
Absolutely love doing gym classes like interval training and circuits. I also got into yoga about 6 years ago.
5. What is a good night out for you:
Drinks outside with friends on a lovely sunny evening.
6. Tell us about something that you are proud to have achieved:
It was really tough studying for a Masters and working full-time. I just about did it though!
7. If you could only have one food for the rest of your life, what would it be:
Definitely cheese!
8. What are the 3 most used apps on your phone:
Strava, BBC Weather, Apple Health
9. Who is your sporting hero:
Being a kid in Brighton, I idolised Steve Ovett. I also used to love watching Daley Thompson compete in the decathlon. After parkrun last week, I must admit I thought Kelly Holmes was pretty amazing.
10. Have you ever done anything that scared the living crap out of you:
When we lived in Italy, I was always slightly terrified about going on my husband’s motorbike. There were a few hairy situations.  Possibly the worst one was travelling behind a lorry overloaded with watermelons, some fell off, along a potholed road when travelling through Greece.
11. Have you ever had or do you have a nickname:
Not that I can mention!
12. What makes you happy:
Everyday epic things like walking under cherry blossom, smelling a rose or seeing a rainbow.
13. What is your all-time favourite film:
Mediterraneo – not just for the film itself but the memories around it (I had just moved to Italy).
14. What music do you like to listen to when you’re out running:
The sort of motivational tracks you here in the gym. I’ve probably not got the best taste in music.
15. What’s something we don’t know about you:
I was an extra in Franco Zeffirelli’s “Tea with Mussolini”. When living in Florence, I was spotted on the street as being “English looking” (not sure that it was a compliment) and asked to be in the film. I had an amazing few days having my hair and make-up done and wearing period costumes. It mainly involved sitting around and eating in the sunshine. I did get to meet Maggie Smith, Judi Dench, Joan Plowright and Cher though!
16. Tell me about something you would happily do again:
Most holidays.
17. What would your epitaph say:
Really don’t know but I would like it to be “kind and non-judgemental”. I definitely think a bit more kindness and empathy in the world would be a good thing.
18. Have you got something that you just can’t bring yourself to get rid of:
A whole loft of things!
19. What is your one weakness:
Coffee.
20. What were you like at school:
I really loved school and was a bit of a swot!
Our biggest thanks to Rachel for her Q&A’s this week and we hope that you feel that you have now got to know Rachel a little better, I certainly have. Check back next Wednesday for another set of Q&A’s with our chosen club member.