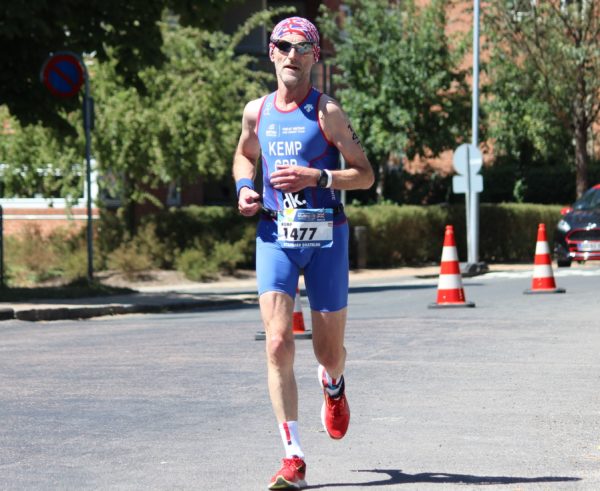 For this week’s chosen member we are joined by a man with a big smile and a big heart. You won’t fail to notice him when he appears as it’s always done with a smile; I am of course talking about Mr David Kemp. You’ll very often catch David at the Brighton & Hove parkrun on Saturday mornings; in fact to date David has completed 293 runs with 244 at Brighton & Hove, now that’s a lot of parkruns. David has recently started dabbling with the bike as well as he tries out a duathlon which is coming up in a few weeks’ time so we wish you well with that one David, now over to you…
Name: David Kemp
1. When and why did you join Arena:
April 2012
2. How long have you been running:
Since 2010.   I used to go for occasional jog runs on the Prom and did do the Brighton Half in 2017 as a Charity Runner for Off the Fence, but that didn’t directly lead to me starting properly.   I have Park Run to thank for that.
3. Where did you grow up:
Hove – if you are from the other side of the Downs you are a Northerner!
4. If you could visit any country in the world, where would you go:
In my twenties and thirties I travelled quite a lot already In Europe, Asia, Australasia, North America and prior to the war in Afghanistan wanted to go over the Khyber Pass and then on the old Silk Route through Tibet and into China.   As that is not possible, Bhutan would be good.   It is a tiny and remote kingdom in the Himalayas.
5. Apart from running what else do you do with your time:
I run my architectural practice which leaves me with more than enough anxiety and frustration to continue to need to run!
6. What would you say to your younger self:
Be more confident in yourself.
7. If you could go back to an age in your life what age would it be and why:
The beginning and do it all again but better, but that would assume you carry back with you the experience to know what to do and what not to do.
8. What’s your favourite website:
Evans bikes currently – duathlon has become an expensive extension to running!
9. Who is your sporting hero:
Gary Player – He was a South African Golfer in his heyday in the sixties and seventies who was small in stature, but made up for it with an impressive exercise regime and taking great care with his diet.   This was considered a bit bizarre back then, but it worked and since then it has become normal.
10. What is your favourite album ever:
‘Remain in Light’ by Talking Heads and best track ever ‘Once in a Lifetime’ – sublime genius.
11. Have you ever met anyone famous or remotely famous:
Apart from Bob Page, Berthold Lubetkin who was a very famous Architect of the era of Le Corbusier – I shot a documentary film (using old style tech) about him as my thesis project at Architecture School and maintained a correspondence with him until his death.   A small but well-known project of his was the Penguin Pool in London Zoo with the concrete helical ramps.   I also met Dame Vera Lynn a few years ago at her house in Ditchling as part an involvement with a charity and Dame Vivien Westwood and Grayson Perry with my daughter Josie.
12. What makes you happy:
The exhaustion of a well-run race and sharing that with others who have done the same and pacing runners to PB’s in parkrun.   It is so pure and unadulterated – if you aren’t Russian of course.
13. If you could do one thing again what would It be:
In terms of correcting mistakes, I can’t pick out one.   Lots of little things that would have made a difference.   In terms of best moments, trekking in the Himalayas.
14. What’s something you miss the most from your childhood:
The time to be relaxed.
15. What’s something we don’t know about you:
I used to be in a comedy street performance / cabaret act called The Brighton Bottle Orchestra.   We busked everywhere including the West Pier (I think we can safely say we brought the house down) and were on Channel 4 having won the speciality section at the Covent Garden Street Entertainment Festival.
16. What’s the one thing you can’t live without:
A hug.
17. What is the hardest thing you ever had to do:
It has been a very tough year – losing Josie so suddenly.
18. What makes you laugh:
Watching The League of Gentlemen – particularly the vet – Mr Chinnery who is modelled on James Herriot, but for whom nothing goes right (and its worse for his patients).   Assume no animals are hurt in the making of the show and catch it on You Tube.
19. What were you like at school:
I went to a local prep school with very strict discipline enforced with corporal punishment and still had boxing on the curriculum so keeping a low profile was a good skill to learn then.
20. What one thing can you not bring yourself to throw away:
My old architectural project drawings on tracing paper. They have character and are so much more personal than digital drawings.
Our biggest thanks to David for his Q&A’s this week and we hope that you feel that you have now got to know David a little better. Check back next Wednesday for another set of Q&A’s with our chosen club member.